Occupy Spokane - Getting It Together

Standing on the triangle-shaped island at Monroe and Riverside, Dennis Smith waves at traffic and greets everyone who walks by. "Good day, ladies," he says to a pair of women wearing sweats passing by on a power walk. Dennis started participating in Occupy Spokane eight days ago. He is there because he's tired of Wall Street's influence on the government. He's tired of the Koch brothers buying political influence. And he says Cathy McMorris Rodgers only does what John Boehner tells her to and follows the party line and does not represent the people in her district. 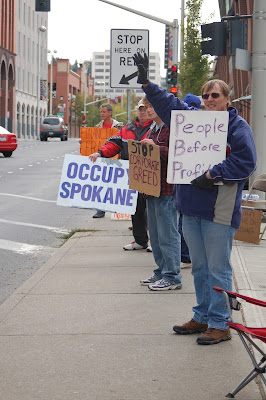 Dennis Smith holds a "People Before Profits" sign as he waves to passing traffic.
There has been a change of personnel at Occupy Spokane. The people who started it two weeks ago have moved on. Today I spoke with three of those who have joined after seeing it on the news. They all articulated a common complaint of monied interests swaying legislators and the disproportional benefit they reap from that influence and at the expense of the vast majority of people. 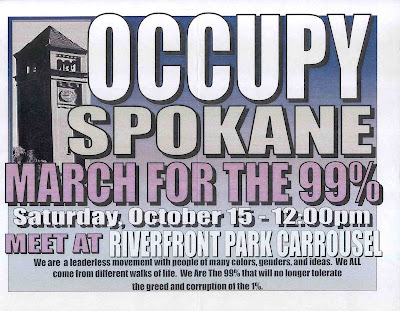 A march is planned for this Saturday. 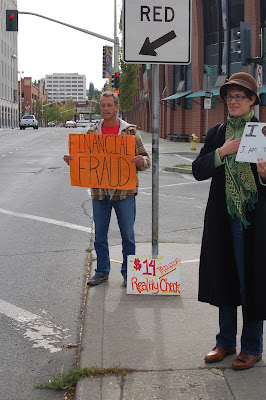 Tim Walsh, holding the Financial Fraud sign, joined the protest last Thursday. He says the repeal of the protections offer by the Glass-Steagall Act helped set up the financial crash in 2007. 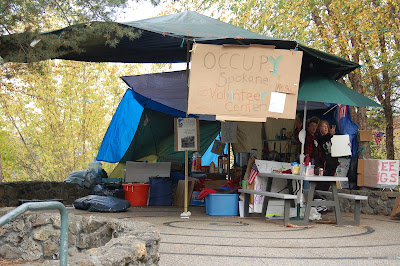 At the corner of Spokane Falls Blvd and Monroe, there's a poem by Sherman Alexie engraved in a spiral laid in granite. "The Places Where Ghosts of Salmon Jump" now serves as the volunteer center for Occupy Spokane. A young woman named Pippie--she asked to leave her last name out--joined Occupy Spokane twelve days ago and helped arranged this with the Spokane Library under the condition that it not be used as a shelter. Pippy says she's been homeless most of her life and thought she'd bring her cooking talents to the group. She works with the Hippy Family Ministries doing a free food kitchen. She said both the city health and fire departments had stopped by to inspect them and they're complying with the city requirements. As of today they are not allowed to heat water for tea or coffee since they don't have insurance should there be an accident with a propane tank. Pippie says a couple of volunteers who live nearby have agreed to provide hot water. She also said that when the group is unable to use donated food, they in turn pass those on to other charitable organizations so it won't go to waste.

So what do people think about the Occupy movement? While I was talking to Dennis an unmarked police car with two uniformed officers drove by. The officer in the passenger seat gave a discreet wave. Passing traffic sounds a horn now and then. Since nothing "newsworthy" has happened, notwithstanding the protester who got hit by a car last night, there's been very little about the protest in the local news. I'm aware of two Facebook groups. There's Occupy Spokane Uncensored, a group of 700+ that you have to ask to join, and there's Occupy Spokane with 3600+ likes. So there appears to be what could be considered sizable support in Spokane.

Surprisingly, even though the Fox News coverage of Occupy Wall Street has been derogatory, a Fox News poll shows that most people have a favorable view of it. 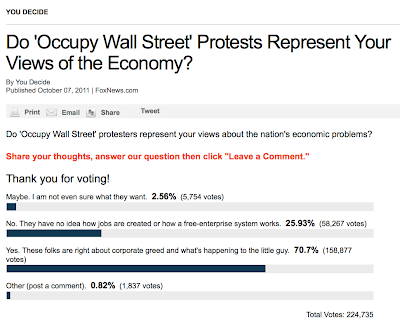 Dennis Smith also had this to say. "We need more 'mom and pop' people down here."

I think he hits the nail square on the head. Everybody has been affected by the recession in some form or fashion. You don't have to be unemployed to be angry and you don't have to default on your mortgage to see the unfairness. City Councilman Jon Snyder stopped by last week and chatted with one of the protesters. In his post he said he told her he would love to see the list of concerns once they have it together. I've known Jon for a while and he is a good person. But what he--and you and I for that matter--need to realize is that "they" includes him...and me...and you. What Dennis calls "mom and pop" people are the good-hearted, hard working folks who know that life is unfair, but also chafe at an unlevel playing field forced upon them. Feeling alienated and powerless, they have withdrawn.

A few in Spokane have found their voice. They stand on the side of the road holding a sign for two hours. Or twelve. They donate food. They help clean up. They pay for printing notices. They do what they can. This leaderless movement in Spokane already has it together. It's just patiently waiting for everyone else to join them.

So what are you doing on Saturday at noon?
Posted by Hank Greer at 5:16 PM

Email ThisBlogThis!Share to TwitterShare to FacebookShare to Pinterest
Labels: community