I received this interesting email purporting to be from an agent from the Federal Bureau of Investigations. The attachment contained a note telling me a Visa cash card loaded with money and addressed to me had been intercepted by customs and I needed to email the agent to make the necessary arrangements to get my millions. I was curious as to what the scam was because there was no mention of payment for anything so I emailed the so-called agent--at his New Zealand email address.

Then I received another one of a similar nature. 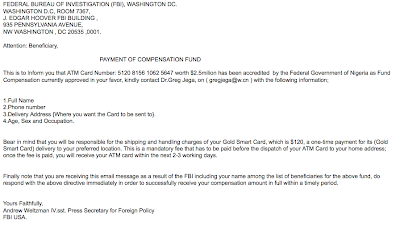 Ah, so that's the deal. I would have to pay a mandatory fee to have the card sent to me. Like that's gonna happen.
Posted by Hank Greer at 8:23 PM