The sun slowly ascended and finally peeked over the horizon when I arrived in Pullman this morning. I had signed up to run the Pullman 50k hosted by Scott McMurtry and Sadie the ultra dog. The cold wind had me shaking as I signed in. I quickly put on my running pants, jacket, hat and gloves to help stay warm as we waited for the start. The run follows a 7.75-mile loop which passed by the parking lot we started at so our vehicles could be our food/drink stops. Eric, a friend and longtime cycling commuter, was also there. He and I ran together for the first lap. While the pace felt comfortable enough, I suspected I was going faster than I intended. Since there were no mile markers we had no idea what our pace was until we finished the lap. 67 minutes. I was planning on 80 so I needed to back off a bit.

The route followed a bike path that was frosted for almost the entire way. The frost kept pace with the shade, receding to the edge of the asphalt path as the warming sun rose. I shed my running pants, hat and gloves after the first lap and traded my jacket for another shirt. I wore the second shirt during the parts of the course where the headwind was the worst. When I didn't need it I tucked it through my belt.

I let Eric go on ahead during the second lap and yet I still finished it in 73 minutes. For a change of pace and scenery, I ran the course in the opposite direction for the third lap. I got to say hi to all the 25k runners who started at 10:00 as well as see how all the other 50k runners were doing. A little over half way I developed a cramp in my left arch so I slowed down and tried to relax. It eased off after a couple of miles but then I started having sharp pains in my lower abdomen. It was strange because although it was in the area where I had a hernia repaired a year ago, I don't have a hernia. I finished the third lap in 80 minutes which was right on the pace I wanted.

Then I headed out for lap number four. I wasn't feeling well so I took it real easy and slow, waiting to see if the pain would go away. It didn't so after a mile I decided I would not enjoy another six-plus miles of that and turned back around. My total for the day was a little over 25 miles, well shy of the planned 31 but I'm happy with the decision I made.

I signed out and wrote down my time for three laps and headed over to the Palouse Falls Brewing Company for pizza and beer with the other runners. While there I got to meet Scott and several others, some of whom are with the running club sponsored by the brewery--the Beer Chasers. A very friendly and welcoming group. And the beer was great which made me feel even better about my decision to stop. I might do this one again. It's worth it alone for the beer and company. 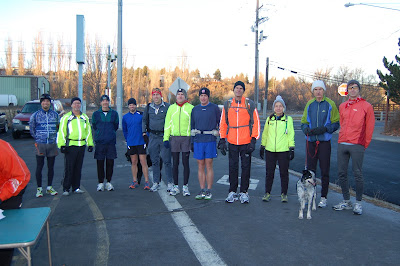 50k runners just before their hours of suffering begin.
Posted by Hank Greer at 8:28 PM

Great job Hank! Who could argue with 25 miles followed by beer?

Thanks, Greg. No argument there at all.