Are there no prisons? And the union workhouses - are they still in operation? I help to support the establishments I have named; those who are badly off must go there.

Last month, Newt Gingrich had this to say about replacing unionized janitors at school with children who attend the school. He claims that children in the poorest neighborhoods are trapped in child laws that prevent them from earning money.

Most of these schools ought to get rid of the unionized janitors, have one master janitor and pay local students to take care of the school. The kids would actually do work, they would have cash, they’d have pride in the schools, they’d begin the process of rising. Get any job that teaches you to show up on Monday. Get any job that teaches you to stay all day, even if you’re having a fight with your girlfriend.

Apparently he only wants to lift up poor children who are lesbian or hetero male? Rather than a plan to help poor children, this sounds more like a bizarre attack on unionized school janitors. Regardless, the ridiculous nature of his proposal is yet another disconcerting highlight of the embarrassments known as the candidates seeking the Republican presidential nomination. And we're talking serious candidates who will say anything--absolutely anything--in order to increase their appeal.

A couple days ago, Gingrich clarified those remarks by saying:

So now he's creating a link between really poor children and crime. The FBI statistics show that crime has consistently been decreasing. I'm not sure what standard he uses to define really poor, let alone poor, but let's see what we get when we use the poverty level. Here's a chart from the Census Bureau (PDF) brief on child poverty in 2009 and 2010 in the richest country in the world. We have less crime but more poor children. 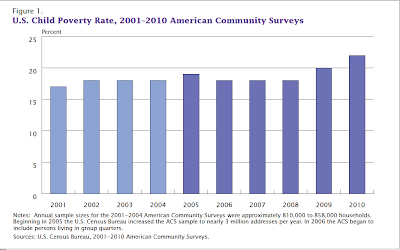 The number of children living in poverty has increased these last couple of years making one out of every five children a possible janitor in Newt's world. That's quite a work force he could mobilize and use to erase the powerful school janitor unions that disgust him so much.

Imagine how clean our schools would be if he put all those kids to work--as long as they weren't fighting with their girlfriends. Or cheating on their wives. Or getting married for the third time. Or admitting to violating House rules and paying $300,000 in sanctions in response to eighty-four ethics charges. It's important that these young people have good role models in their lives and develop that habit of "I do this and you give me cash" unless it is illegal.
Posted by Hank Greer at 6:05 AM