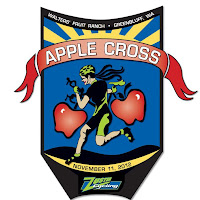 The thermometer read 27 degrees when I left the house to drive up to Green Bluff for the penultimate race of the Inland Northwest Cyclocross Series 2012. When I arrived at Walter's Fruit Ranch, the van's thermometer said it was 30 degrees. A veritable heat wave was on the way. But the sun disagreed and hid behind the clouds, never taking even a small peek at the people bursting their lungs in the frigid air. The cold called for ski gloves and snow suits for the spectators and riders layered up.

I cruised around the course and found it was, as to be expected, absolutely frozen. Pumpkins lined many parts of the course. Some of them would become victims of sliding tires during the day. 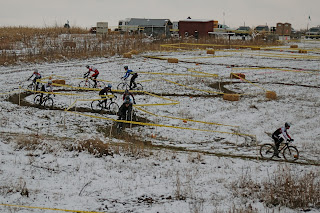 The twist 'n' turns between the start and the run up. 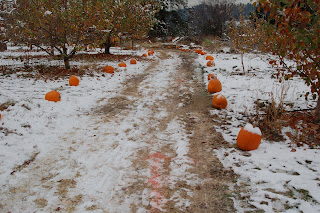 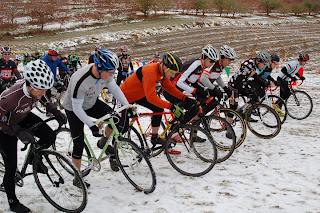 The start was a short uphill straightaway. 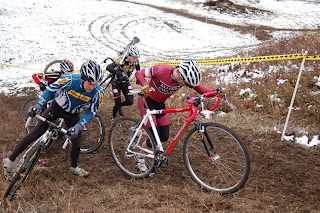 The temp reached 36 by the third race and the course got greasy. 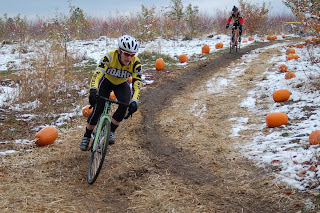 The loose straw combined with the thawing mud made this a treacherous turn. 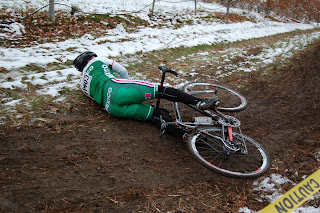 It only takes a split second. 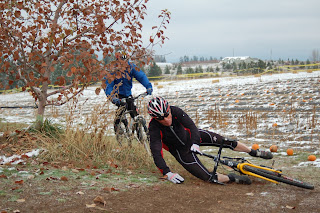 A number of racers bought it on this turn as well.
I got off to a good start and was in third until we reached the run up. The warming temperature transformed the frozen dirt into mud everywhere on the course. For some reason my shoes seemed to be the only ones that couldn't get any traction on the run up. It was very frustrating as a number of riders in my group got by me. The 180-degree turns at the end of each back-and-forth in the orchard slicked up, too, especially one with a lot of straw thrown on it. I had a soft fall there but stayed upright for the remainder of the race. After that it was just a matter of cranking out the laps until it was over. 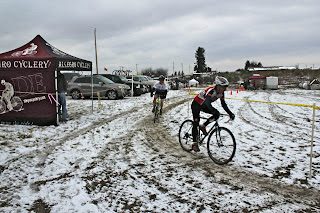 Me chasing Joe.
I had a rider in front of me, Joe, who I chased, caught, and ended up chasing again. (Danged slippery run up!) Another racer, Steve, who rides a single speed started catching up to me on the fourth lap. This was his second race of the day. Steve is a machine. He got by me on the fifth lap only to crash on the turn with all the straw and mud. He fought to reel me back in and I took a chance on a turn that caused my back wheel to slide out. I stayed upright but I also stopped. Now he was back in front and we both scrambled to catch Joe. The finish was next to the start which meant we had to sprint uphill. Although we had closed in on Joe, there was still a gap of about thirty feet when he crossed the finish line. I finished with my front wheel next to Steve's pedals. All three of us shook hands and congratulated each other for our efforts. Fun times.
Posted by Hank Greer at 8:51 PM

Hank, I'm trying to temper my enthusiasm so as not to come across as a total dweeb, but damn. Superb storytelling and even better photos.

Pat, if there's one thing you are not known for, it's dweebishness. Glad you like the post.