The rain was steady at my house and the online Doppler radar showed a large wet patch was moving towards Coeur d'Alene, site of Crosstober Fest. I arrived an hour before the first start to check out the course and scout out photo vantage points. The last time I rode this course it was covered in snow so I was interested in seeing what I was falling on a year ago. 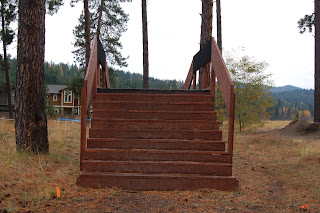 The obligatory steps followed by a down ramp. 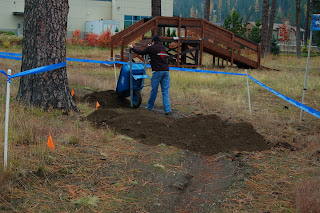 Let's put some loose dirt in a turn.

The first race was for the kids. About five minutes before the start the heavens opened and stayed open for the next three hours. Holding a golf umbrella in one hand and a camera in the other made taking photos a little more challenging, but I managed to keep the camera dry enough. 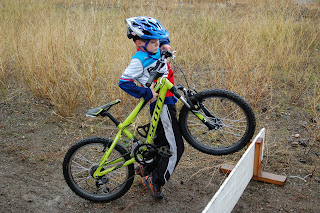 You have to hand it to these kids when they're hefting bikes
that are in far greater proportion to their body weight
than the big bikes are for adults. 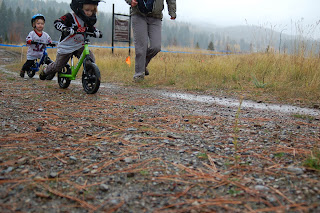 A couple of troopers on Strider bikes. 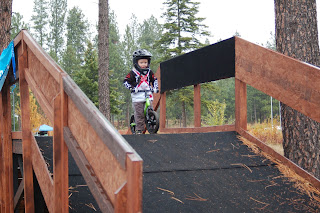 There was a bypass so the little ones could avoid the steps. This young rider wanted no part of that. After zipping down the ramp and going halfway around the shortened course, the Strider rider declared, "I want to go back to the steps." From then on the race consisted of just ripping the descent several more times. Where do you find kids like this? At a cross race, that's where. 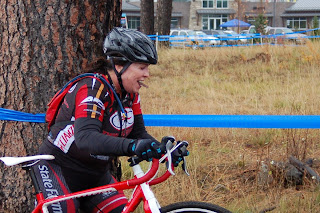 A chocolate hand up during the women's single speed, Cat 4, and Masters 40+ race.

The downpour continued for the women whose race followed the kids. Standing water was the order of the day. The sandy parts became easy to ride but the dirt churned to mud more than made up the difference. In spite of the rain, it wasn't that cold for the racers. 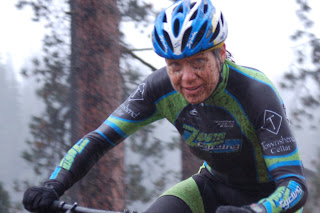 Did I mention it got muddy?

Eye protection was called for. Failure to answer the call meant you would be blinking a lot to clear the water and mud from your sight. The mountain bike race was third and the fat tires churned up the course even more. 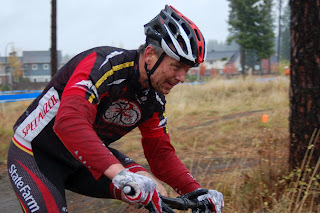 It's like bikes and mud were meant to be together.

The rain slowed to a slight sprinkle just before the fourth race of the day, Men's Masters 40+, 50+ and single speed. I had a good first lap and then two things starts sucking the life out of my legs. One was the half-mile long straightaway into a headwind. I'm a wimp in a headwind. The other was the mud. So pretty much everything except the short sandy parts and the half mile return with the wind. In three years of racing, this was my first race with a substantial amount of mud. The Michelin Mud 2 tires did their part and I stayed upright the entire race. Getting through the mud was another story, but it was fun.

Side note: Glen checked my bike after my asphalt slide last weekend. The rear derailleur took some serious grinding but still functions perfectly. He replaced the rear brake pads and remarked that the front brakes work really good. So I made a conscious effort to use the front brakes more. He's right. 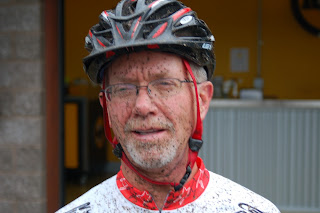 I think there's a clean spot on my left ear. 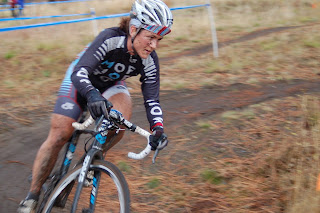 Next up was the Women's Cat 1, 2, and 3 and the Men's Cat 4. I was amazed to see how some of these racers tore through the mud like it was nothing. 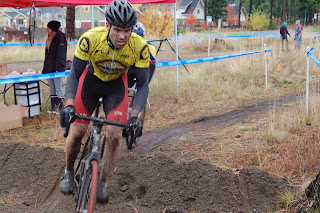 The cloudy conditions and the fading light made photography even more challenging. The shutter speed for the sports setting got slower and slower. I had to discard a ton of blurred photos. 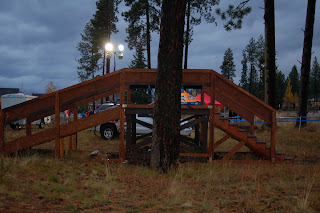 With the lighting conditions quickly deteriorating, shooting the Men's Cat 1, 2, and 3 race was very difficult. There was a generator with lights to help with the technical part of the course but it didn't help the camera any. It was brighter than the above photo depicts but not bright enough to shooting fast moving targets. So I had to use the flash but I was careful to shoot from the side so I wouldn't blind anyone. 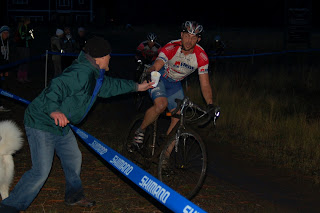 The only head-on shot using the flash.
But it's a beer hand up so what're you gonna do, right? 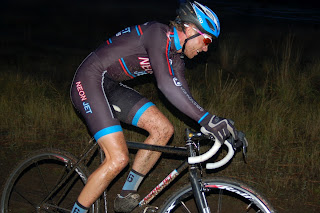 Meet JT Fountain. This dude tore the course apart on a single speed. I think the guys he lapped were thankful they could stop because the darkness was making it really tough to continue.

Money, beer, and other prizes were handed out. Nothing is awarded for being DFL so I came home empty handed. Nonetheless, a good time was had by all and it was capped off by Jerry Long who, using a megaphone, provided some very entertaining heckling.
Posted by Hank Greer at 7:18 AM