My brother John has known Russell and Karen Ivy for 12 or 13 years now. Since 1986, the Ivy's have held a family and friends barbecue and triathlon. The triathlon consists of frisbee golf, table tennis, and horseshoes. Those who choose to play frisbee golf do so as an individual event. Names are drawn to randomly pair up those who wish to play the other two events.
Kathy, Steph and I, along with my sister Barb, were staying with John for the weekend. We had also picked up Josh and Amanda. Long story short, we were invited to attend the Ivy Triathlon. Barb had a great idea in that we ten (including John's family) should decorate t-shirts and show up as "Team Greer". By coincidence, John and Susan had a bunch of plain white T's on hand along with clothing markers so we got busy. John went with the wife beater shirt. I decorated a child's medium. Everyone did a great job personalizing their shirts. 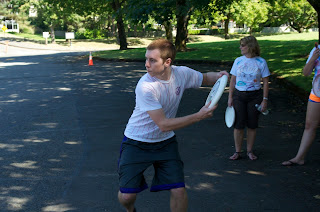 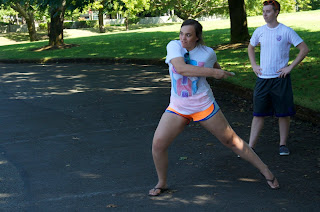 ...and Amanda show off their disc skills. 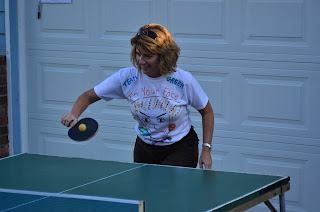 Kathy on the table. 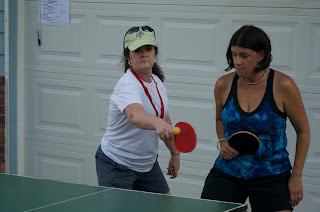 Susan on the table. 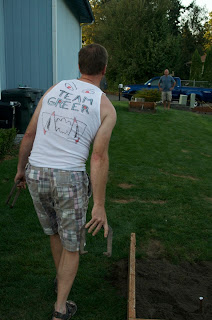 John about to throw a ringer.

Russell and Karen loved it. The food was awesome, the people were welcoming, and the games were fun. They even invited us to return next year.
Posted by Hank Greer at 9:25 PM