In one of his later routines, the late George Carlin talked about who is really in charge of our country. Bad language alert!

Because the owners of this country don't want that. I'm talking about the real owners, now. The real owners, the big wealthy business interests that control things and make all the important decisions. Forget the politicians, they're an irrelevancy. The politicians are put there to give you the idea that you have freedom of choice. You don't. You have no choice. You have owners. They own you. They own everything. They own all the important land. They own and control the corporations. They've long since bought and paid for the Senate, the Congress, the statehouses, the city halls. They've got the judges in their back pockets. And they own all the big media companies, so that they control just about all of the news and information you hear. They've got you by the balls. They spend billions of dollars every year lobbying,­ lobbying to get what they want. Well, we know what they want; they want more for themselves and less for everybody else.

Proving Carlin's point, The Heartland Institute, a conservative think tank that helped the Philip Morris tobacco company question the risks associated with second hand smoke and now is heavily funded by oil and gas companies and promotes studies and conferences that dispute man-made climate change, changed George Carlin's words just a bit and posted them with a photo on their Facebook page. 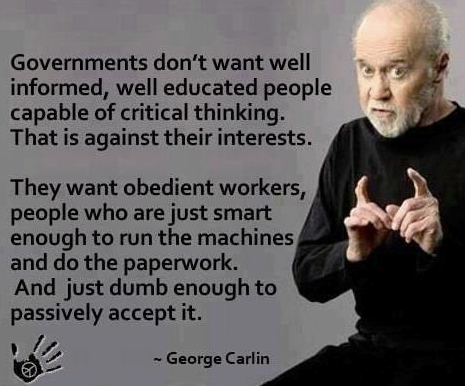 Do you see what is different? "Governments" replaced "They", which changes the entire meaning. The "they" that George Carlin referenced is the owners. The big wealthy business interests. They are the ones who don't want well-informed, well educated people capable of critical thought.

And if you did your homework you'd find that in this case, George Carlin was right.
Posted by Hank Greer at 3:27 PM