With Time To Spare To Get A Spare 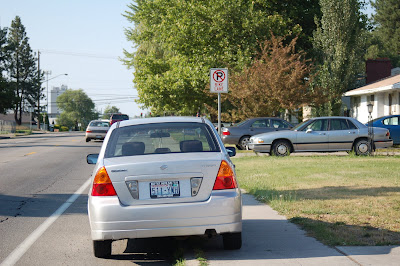 During the ride home I spotted a car blocking the bike lane and thought, "Great! Well, at least I have my camera so I can get a picture." Then my rear tire went flat. I took my picture and then removed my panniers and flipped the bike over. 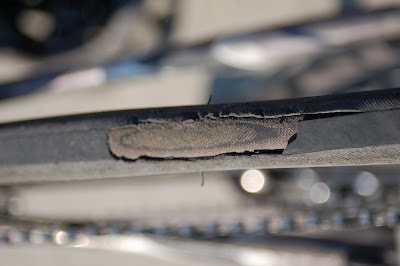 One look at the tire told me the flat was the least of my problems. I walked from Addison to Division and caught the #25 bus. I called North Division Bicycles and found I had just enough time to get a tire. So I did. I got home a little over an hour late but I get to ride tomorrow.

You're probably wondering how that tire got to looking so bad. It's only two years old but it has a ton of miles. Just last weekend I put new brake pads on. While testing them out I skidded a couple of times and I guess I peeled some of the tire off when I did. Obviously I didn't notice. I guess I was lucky to make it as far as I did.
Posted by Hank Greer at 7:08 PM