Hey, There's One Over There

Being retired military, I received the latest issue of Still Serving, a newsletter for retirees. 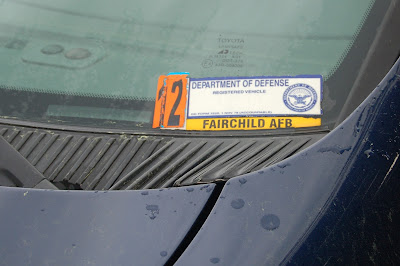 After many years of heightened security where every vehicle operator and many occupants had their IDs checked at the gate, the Air Force has done something smart. They no longer require base stickers. And that makes sense since they're checking everybody coming in anyway.

But they just had to add one bit of nonsense.

If you frequently visit non-Air Force Military bases, you may wish to leave your current decal on your vehicle. Otherwise, the Air Force recommends (not mandates) that you remove your decal. In this way, you won’t advertise (to terrorists, criminals and foreign intelligence operatives) that you’re a member of the Department of Defense while off base. (bolding mine)

Yeah. Advertising to terrorists, criminals and foreign intelligence operatives. Because they are all over the frickin' place looking for those stickers and not paying attention to the "Retired Air Force" decals, license plate frames, and other accouterments that many retired military tend to stick on their cars. And in the meantime, all those civilians, active duty and retired folks in the other services are still...um...advertising.
Posted by Hank Greer at 7:41 PM

It does bug me that on FAFB the driver can vouch for all the other occupants, yet the base hangs silly ropes out all around the base and wipes out parking spots closest to all the buildings.

We recently stayed at McChord AFB where every occupant must provide ID, and there are no changes in parking around the facilities.

At least yours is a yellow one. They won't want to kill you as bad.