It Ain't Looking So Good

The Congressional Budget Office recently released its 2011 Long Term Budget Outlook. It's 100-plus pages of dry, yet important, economic forecast. I don't pretend to understand it all.

The document presents two outlooks. One is called the Extended-Baseline Scenario which "adheres closely to current law." So if a tax is set to increase or decrease sometime in the next ten years, then this scenario assumes that will take place. The other is called the Alternative Fiscal Scenario. It "incorporates several changes to current law that are widely expected to occur or that would modify some provisions of law that might be difficult to sustain for a long period." I.e., the Path to Prosperity that the Republican Congress was all heffered up about until the people got all heffered up about Medicare becoming a voucher system.

Anyway, this chart on page 4 caught my eye. You'll notice that if we leave everything alone for the next four years then revenues will cover expenditures. Note that this doesn't include interest payments on the federal debt. Also note that following the alternative scenario puts us even deeper in the hole as tax revenues fail to match spending. The path to prosperity indeed. 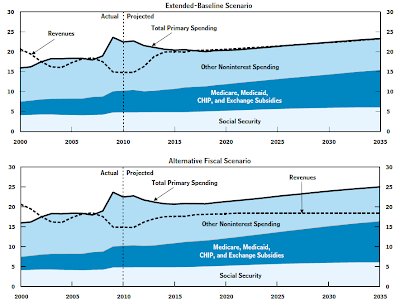 A major contributor to this is the "taxes are off the table" mantra that sells so well in society. If it's repeated enough, many people will believe that they pay enough taxes, that government can't help but be wasteful, and that raising taxes will doom us as a nation.

There's an important statement on page 52 of the budget outlook in the chapter concerning Social Security.

When earnings inequality increases, as it has in recent decades, the taxable share of earnings declines.

In other words, as fewer people make most of the money, most of the people who make less are unable to contribute enough to sustain the system they are supposed to benefit from. It's easy to see how that applies to Social Security, but the same principle applies to the rest of our local, state and federal governments. If you want want law enforcement, fire protection, schools, etc., then you have to pay for them. And if most of the earnings are going to fewer people, you have to raise taxes for them because that's where the money is.

Or you can promote selfishness under the guise of limited government, corporations acting in their best interest, government regulation is bad, and pulling your own weight in a system that heavily favors the few. The alternative is clear.
Posted by Hank Greer at 7:24 AM