And No Playing With Yourself Either 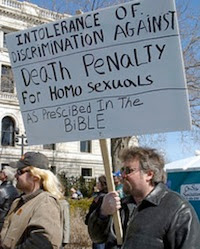 I spent most of yesterday on the road, taking Josh to UW for his second year there. While I was driving back and forth across our state, the Republican party candidates had yet another debate in which they apparently repeated themselves and each other--again. Rick Santorum has one characteristic that sets him apart from his fellow candidates and satisfies a small but vocal group of supporters. (Don't forget the audience reactions below.) He hates gays the most. Santorum is almost frothing at the mouth about gays. Oh, maybe frothing isn't the best word choice. Sorry.

From the transcript. (Sorry for the link to Fox News.)

QUESTION: In 2010, when I was deployed to Iraq, I had to lie about who I was, because I'm a gay soldier, and I didn't want to lose my job.

My question is, under one of your presidencies, do you intend to circumvent the progress that's been made for gay and lesbian soldiers in the military?

SANTORUM: Yeah, I -- I would say, any type of sexual activity has absolutely no place in the military. And the fact that they're making a point to include it as a provision within the military that we are going to recognize a group of people and give them a special privilege to -- to -- and removing "don't ask/don't tell" I think tries to inject social policy into the military. And the military's job is to do one thing, and that is to defend our country.

We need to give the military, which is all-volunteer, the ability to do so in a way that is most efficient at protecting our men and women in uniform.

And I believe this undermines that ability.

I would -- I would just say that, going forward, we would -- we would reinstitute that policy, if Rick Santorum was president, period.

That policy would be reinstituted. And as far as people who are in -- in -- I would not throw them out, because that would be unfair to them because of the policy of this administration, but we would move forward in -- in conformity with what was happening in the past, which was, sex is not an issue. It is -- it should not be an issue. Leave it alone, keep it -- keep it to yourself, whether you're a heterosexual or a homosexual.

It's incredibly amazing and depressing what can pass for a Republican presidential candidate these days.
Posted by Hank Greer at 5:02 AM