Where Are The 99 Percent? 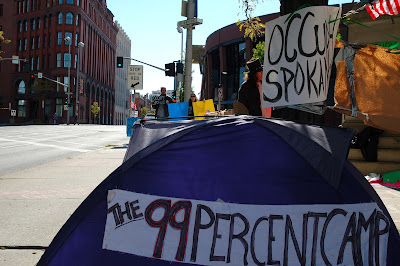 On September 17, protesters began occupying Wall Street in New York City. If you haven't heard of this, it's probably because there has been very little news coverage. But now that some New York police officers are pepper spraying nonviolent, compliant protesters and arresting journalists and innocent bystanders, more people are starting to take notice. However, what little news there is is more about the abuse at the hands of the police instead of what the protest is about. And while the heavy-handedness is a far cry from police dogs and fire hoses, unnecessary force restricting our First Amendment rights is anathema to our society regardless of how it is manifested. Aside from that, the message is not getting out to the American public. But similar protests are now taking place in other cities: San Francisco, Chicago, and even Spokane.

On September 28, some folks began occupying the triangle of cement at Monroe and Riverside watched over by a statue dedicated to a Spokane native who died in the Spanish-American War. They held up signs and cheered at cars honking their horns in support. Yesterday was Day One of their "occupation". Last night a few of them set up tents in the grassy median on Riverside Avenue. According to Dave Bilsland, the organizer, their message is, "Join us. We need to change our economic methods. Personhood should invoke a working heart. Corporations don't have a heart--literally and figuratively." 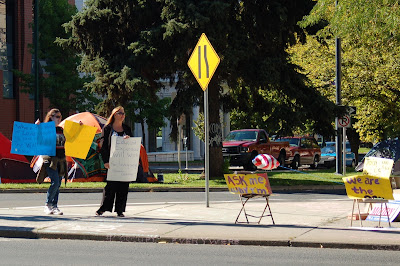 A very small percentage of Spokane's 99 percent.
Ms Johnson, formerly a program director for a public radio station, is the self-appointed public spokesperson for the group. She asked that I leave her first name out. Admittedly, besides being comfortable in the spokesperson role, she is aware how the message is more positively received when delivered by a professionally dressed person as opposed to the very casual clothing of most of her fellow protesters. She also noted that if there was a group of people in suits holding up signs they would garner much more attention. 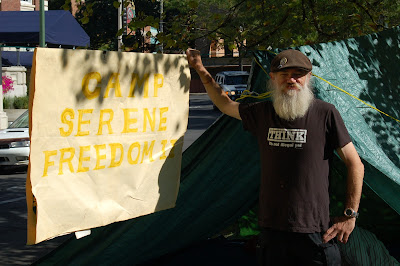 Dave Bilsland
Johnson explained that many have complained that the Occupy Wall Street protest--now in its 13th day--doesn't have a single message, but that there's an explanation for that. "There are multiple reasons people are unhappy with their government. I'm an educated person with a master's degree in communications and plenty of experience. And I am unable to find a job. I have $75,000 in student debt that I would love to pay off. I am representing one unemployed person in the State of Washington." She went on to explain that the vast majority of people in Spokane are part of the 99 percent who provide the foundation for the wealthiest 1 percent. Her concern is that not only are our elected officials aware of their unpopularity, but that many of them them don't care because it takes money to get elected so looking out for the monied interests is their priority.

That is the main point of the entire movement--the monied corruption of our democracy.

Hilsland said a Spokane police officer stopped by last night and warned the tent dwellers they were in violation of Spokane's Transient Shelter ordinance. Hilsland says they only plan to stay until Saturday.

The group is not without rules. While I was there someone swept the pavement and made a trash run even though there aren't that many people to pick up after. After all, this is Spokane, a place where few people want to make waves and the few that try are easy to ignore.
Posted by Hank Greer at 7:44 PM

Hank, the people over at Freakonomics have a different take - http://www.freakonomics.com/2011/09/30/dear-occupy-wall-street-are-you-sure-youre-in-the-right-place/

Another perspective is from author Gretchen Morgenson in her book; Reckless Endangerment: How Outsized Ambition, Greed, and Corruption Led to Economic Armageddon - http://www.amazon.com/Reckless-Endangerment-Corruption-Armageddon-ebook/dp/B004H1TM1G/ref=sr_1_5?s=digital-text&ie=UTF8&qid=1317421899&sr=1-5

Both make the so-called occupation of Wall Street seem a bit petty, misguided and silly.

Thanks, Al. I would also suggest reading The Big Short.

It's both fascinating and depressing as it details the people who knew what was going on and either profited greatly or drove off the cliff.

As to the Freakonomics article. The author first pins the blame on Andrew Cuomo and links to an article that also blames Cuomo and yet states, "He took actions that—in combination with many other factors—helped plunge Fannie and Freddie into the subprime markets without putting in place the means to monitor their increasingly risky investments." That's like saying it was one raindrop out of many that caused the river to flood.

The Fed's contribution is certainly a factor along with the behavior of the banks. The Big Short puts the bank's (and accountant's) involvement in a different perspective. Banks and investment banks knew they were dealing with bad loans. The creativity involved in bundling bad loans together was so good, many investors and accountants just had no idea how toxic they were. The few people who truly understood what was happening made a killing betting against it.

Hank, I have read The Big Short - it was a fascinating read.