The Best Cyclocross Racers Talk To Me

Not to brag, but yes I've exchanged words with some of the best cyclocross racers in our area. I chalk it up to my natural ability and this year shouldn't be any different even though I won't have the start I was hoping for. I had plans. I was going to do a long self-supported ride at the end of the summer. I was going to run more often and for longer distances. I was going to slim down a few pounds and be ready to take the cyclocross season by the horns and own it. I had plans--and I got a little sidetracked. It happens. 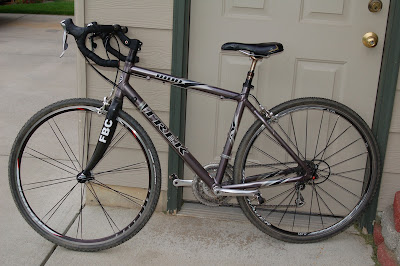 Yesterday I stripped the non-essentials from my bike and threw the cross tires on. Scouting out some nearby trails I came up with a halfway decent training area. It's got most of what makes a cross course endearing: elevation gain/loss, sand, erosion ruts, and protruding branches and rocks. Might be some mud if we get enough rain today.

Like last year, my goal in every race is to get as many laps completed and as much distance covered as possible before I hear those ominous three words indicating the end of my race is at hand.

I always remind the potential race leaders when we talk prior to a race to save me some snacks. Sometimes it works, and other times not so much.

Good luck in the mud Hank.

If it's any consolation, I'll probably be the first guy to hear those words. I think I'm the slowest cyclocross racer around!
Scott

Al, thanks for the good wishes.

Scott, see you at the races. Hope you don't mind some company bringing up the rear.

My goal this year is to get out of the bottom 20%. I'm still working on it. Hope to see you at Fort Steilacoom.