It was a different Spokefest for me and Steph this year because we didn't ride much of it. More on that later. My sister, Barb, usually runs BRRC's Sunday Sundae but decided to accompany us on the bike ride today instead. 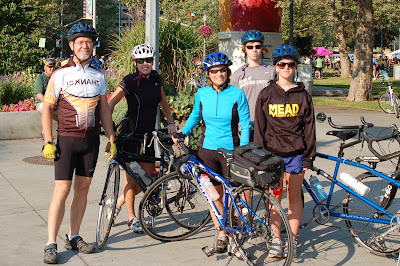 Obligatory group photo: Me, Barb, Kathy, Josh and Steph.
This year the riders were grouped at the start according to the route they were taking. The 47-milers were up front at Post Street. The 21-mile riders, overwhelmingly the largest group, were a block behind at Wall. And the 9-milers were lined up at Howard. We were all in the 21-mile route group. 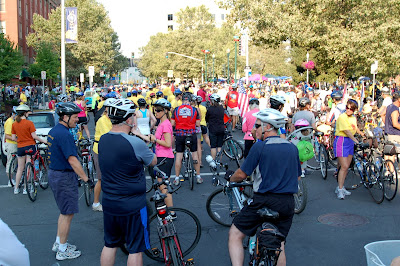 A view of the 21-mile route group from the back.
After the first group took off, we inched along for a block or so before we could start riding. Steph and I easily cruised along on the tandem, passing people going down Main into Peaceful Valley and letting them catch back up to us while we climbed out of it and onto Government Way.

Then disaster struck. Not so much for us, but we were involved. A woman riding on the left side of the lane ran into a traffic cone. Her front tire was dead centered on the cone which scraped along the road slowing her down. When it stopped her, she fell over. The rider in front of me and I slowed and moved a little to the right to avoid her. As I went by, I looked when I checked on the woman who fell over and she said she was okay. But another woman in front of us went down. I didn't see it but Steph said the lady turned her front wheel and braked at the same time. Someone else ran into her and fell. The bike that was in front of me stopped and since I was right behind and just now turning my head back to the front, I ran into it and wedged my front tire in between the crank arm and frame and removing a chunk of my front tire in the process.

The medics were on the scene in no time. We helped clear away all the bikes so the mass of riders could get through. The woman suffered shoulder and ribs injuries bad enough to warrant an ambulance call and I hope she's doing okay.

Had I been riding my single, I probably would've continued the ride on that tire. But I had Steph and having been through a flatted front tire before, I know it had catastrophic potential if a flat or blowout happened on the tandem. So we turned around and limped along, taking the short way back to the park. 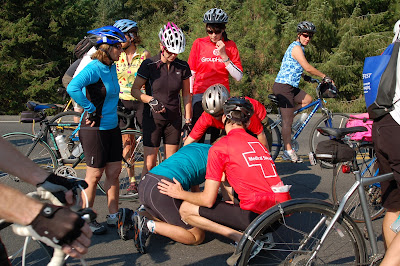 The scene of the accident. Plenty of medics. (And Kathy and Barb are nurses.)
As he does every year, an enthusiastic and energetic Bill Bender greets every rider at the finish. That's about 1900 high fives for the day. Bill and the Spokefest volunteers do a great job and the improvements over the first Spokefest three years ago are noticeable. 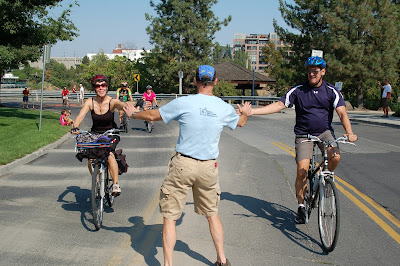 Bill pairs up high fives.
Along with the various bike and eco-related booths, we had some very good entertainment in the park. I've never heard of Big Red Barn before, but I enjoyed them very much. They describe themselves as playing a "funky blend of bluegrass, blues, country, jazz and other string-band music." They've been around Spokane for eight years. I need to get out more. 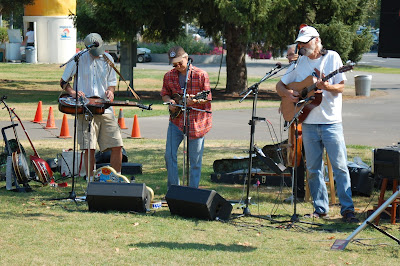 Big Red Barn.
Chalk this up as another excellent event by the Spokefest organization.
Posted by Hank Greer at 3:35 PM