The third annual Black Friday Bike Ride was graced with cool temps and no rain. Ten riders showed up to climb, jounce, slog, and rip down about 19 miles of trails. At one point they threw their bikes across the water and then leaped across. Pat has shots in his post. 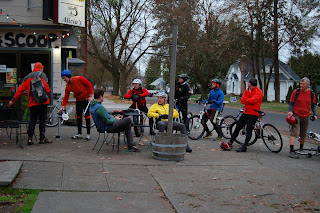 John's pre-ride pep talk. "I'm going to take you places you may wish to never see again. Some of you may think you're going to die." Well, that's what he should have told us. 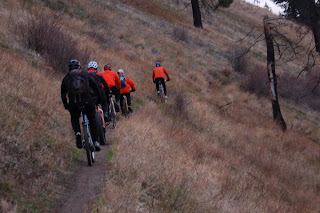 Warming up on the trails below High Drive. 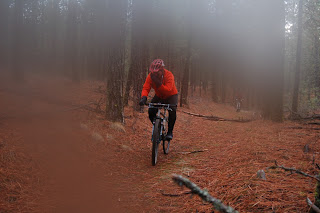 I pulled my camera out of my backpack and thought my viewfinder was fogged, but it was the lens. That's Sean from Fairchild AFB being all shy for the paparazzi. Sean is new to the area and stumbled upon John's ride announcement on Thursday night. Not being familiar with Spokane's cycling scene he decided to show up and see what the BFBR was all about. He did not regret his decision. 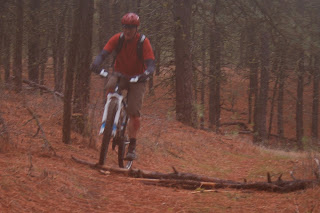 Scott and his bloody leg. He took a spill early on, but Scott is unaffected by blood loss, pain, or open wounds exposed to the frigid air. Nor did his injury affect his leaping skills. 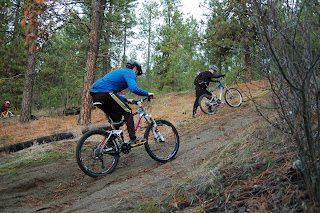 One of the several painful climbs John took us on. Not long after this particular climb, we were offered an alternate route to the "slippery cliffs". Well, you don't get this far into it and miss out on that, now do you? For those of use without suspension, the slippery cliffs consisted of wet basalt that shook our bones loose. There were branches to duck under and a pair of trees that are just wide enough for handlebars to pass through. As one rider discovered, you really should hit that at dead center. Nobody died on the climbs or the murderous terrain, but the thought may have occurred to a rider or two. 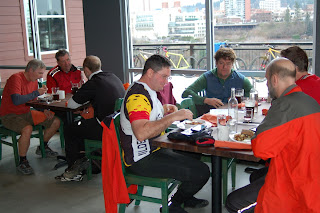 Three hours and 23 miles after leaving The Scoop, we stopped by David Blaine's Central Food restaurant where he graciously welcomed us hungry, sweaty cyclists. The food was delicious and from my observation of those who were partaking, the beer was too. 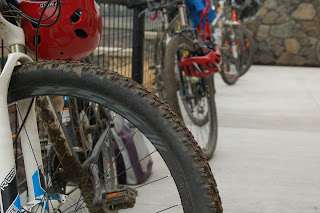 With the mileage and terrain we got in, this was an excellent Black Friday Bike Ride. Where did we go? I have a general idea. We started at The Scoop. From there we headed over to High Drive where we bombed down some exciting downhill. Then we followed High Drive trails south to Hatch Road. We swerved into a dead end road and through someone's driveway, and followed more trails that took us near the bottom of Hatch Road where we crossed Hwy 195. Traveling south for just a bit, we turned right on White Road where we immediately headed off into the wilderness. At some point we turned northward because we ended up back at Hwy 195 at Thorp Road. Crossing at Thorp, we cut through the neighborhood to High Bridge Park. From there we followed the "river trail", which I had no idea existed, and dodged huge rocks, ducked under fallen trees, and rode off-camber along the west side of the Spokane River to Meenach Bridge. From there it was up Pettit Drive and through the West Central neighborhood to refuel at Central Food.

Thanks again, John, for leading us on this fun and challenging ride.
Posted by Hank Greer at 7:55 AM

I'm not sure about your comment early in this post "way better than shopping". Wifey and I drove up to Freeport Me. home of LL Bean and I ended up with a new bike.
The point: Sometimes shopping is better.

I found you on John's Spokane site which I have been following for a few years by the way. A pleasure to meet you. cyber speaking.

Great to "meet" you, too. That's a nice bike you picked up.

I am not as shy as the picture above makes me out to be... But I am posting as anonymous. Great ride, I really enjoyed it. Sean