An Incredible Level Of Conceit

This morning I stumbled across a strange piece on a site called Western Journalism, which is run by The Western Center for Journalism otherwise known as Floyd Brown. Do just a smidgeon of research and you'll find it's nothing but rightwing hit pieces that have little or nothing to do with actual journalism.

They are identified as none other than "Matt Shea's primary opponent."

If there's anything that gives an elected politician the shivers, it's a personalized primary opponent. Small wonder, then, that the publishing of this article was found necessary in order to set the record straight on just how great Matt Shea is. Complete with links to Matt Shea's Freedom Agenda Facebook page, and Matt Shea's radio show, and Matt Shea's LinkedIn page, the supporting text in support of Matt Shea clearly establishes the beyond-awesomeness persona that is Matt Shea. How far beyond awesome?

So beyond awesome that among the awards he lists on his rather lengthy LinkedIn page, he includes "1st Place, Ponderosa Young Writer's Fair," all the way back from his elementary school days. 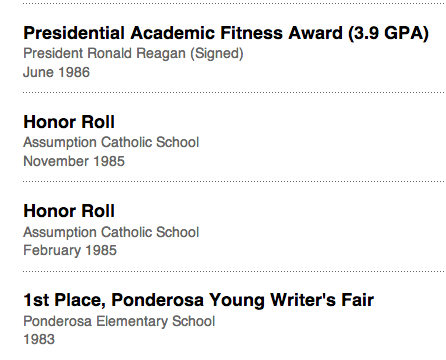 My guess is that if you view Matt Shea's complete profile on LinkedIn (sign up for LinkedIn today...It's free!), you'll find out how Matt Shea did in a baby photo contest, when he started walking, and how many years it was before he was weaned.

As with any rightwing critically thought out news article, it's just not complete without knocking someone down. Ben Oakley and Kevin Parker, therefore, as recruiters of the fear-inducing "Matt Shea's primary opponent," must endure the feces-flinging chimpanzees otherwise known as the champions of true conservative values. Or in this article's case, the author "Guest Writer".

Guest Writer tells us that Oakley is resigning as Chairman of the Spokane GOP Committee in a scandal that "rocks" the Spokane County Republicans, at the request of Susan Hutchinson, the state committee chair, for recruiting "Matt Shea's primary opponent." To help us see what kind of person Ben Oakley is, Guest Writer includes a link to a Salon article in which Oakley, who was a sophomore a Columbine High School, made disparaging remarks about the two shooters being gay.

I can't find anything to support that Oakley is resigning in scandal. But I did learn he was moving to the Seattle area. Maybe if he's not living in Spokane, he can't be the chair of the committee any more and would have to resign. Just maybe.

Guest Writer smears Kevin Parker as an "establishment Republican" with a Washington Conservative Union rating of 79%, nearly twenty points below Matt Shea's rating. And he's an anti-freedom elitist. And he may be under the control, if not heavily influenced, by Karl Rove.

Guest Writer has to wrap it up at some point and and what better way for Guest Writer to conclude the article than this.

Shea went on to show his ability as a statesman. “I have personally spoken with Rep. Parker to ask him why he is a part of this. He told me that I have ‘character issues.’ Well there they go again…character assassination is a favorite Rove tactic.

Hmmm, not unlike what Guest Writer is doing in this so-called piece of journalism. And not unlike the character issues that motivate the conservatively-principled Guest Writer to hide in anonymity.
Posted by Hank Greer at 8:50 AM

I tried to read your inside baseball style takedown of Republican disunity as a distraction from our President's citing of "international law" to condemn Putin.

Didn't work. I suppose there is a similar theme though. Obama and Bush flouted international law on invasions, torture, Gitmo, surveillance, etc so many times, that when they actually need to strike a moral high ground, it rings rather hollow.

This dude or his opponent, Obama or Bush, the US or Russia--what's the difference?

I suspect that in order to save the Ukraine, we shall have to destroy it. And probably ourselves.

Good thing we held onto all those nukes.

The really good news is that Democrats and Republicans will unite like it's the Iraq War all over again. Disputed primaries will be so unpatriotic. Ever candidate will score 100% conservative. Clapper can spy on us all he wants, for our own good.

Surely Sir Kerry's manservant has knotted a fine star-spangled cravat for his Lord, and even now the gallant Secretary has galloped onto a beachhead in Sevastopol?

Faced with the awesome wrath of our White Knight, the villain Putin shall be drenched in frightened thick sweat and squeak like the Russian hockey team.

So, here we are again, back at the eve of destruction but this go around with the mightiest arsenals in human history commanded by the tiniest most vapid "leaders" of all time.

We're not exactly talking Churchill vs Hitler, or Kennedy vs Kruschev, or Nixon and Mao, or fer cripes sake Carter vs Brezhnev.

It's hard even to take these guys seriously, but we kinda gotta.

Vlad the Relatively Bad
***VERSUS***
Barrack Not Exactly The Rock

Two go in, but only two come out!!

For my part, I suspect the fight is staged at least to the extent that Putin and Obama have tacitly agreed to split off some territory.

Partition is very Cold War-y, but elites on both sides benefit from a new irony curtain.

Nothing to see here, back to the expensive petty fights over small differences we like to call democratic elections.

How does one assassinate the character of those who haven't any?


Character defecit challenges both Democratic and Republican assassins, particularly as the nobility forces a bland Jeb-Hillary joust, and America yawns in disgust.