Much Better Than Last Year

Small groups showed up early for the Cathy McMorris Rodgers town hall meeting. An email from Move On and a notice from the Spokane County Republicans rallied the masses. Well, it was masses compared to last year's town hall.

An older gentleman, wearing a red, white and blue American flag tie and a complementary RW&B Cat-in-the-Hat style hat, sat in a chair on Post holding these two signs. He introduced himself as John and asked that I not take his picture. He did permit me to shoot his signs. He said he was out there because he wants God to stay in the Constitution, the government, public schools, etc. And now those atheists put their signs on the STA buses.

I asked him and a number of other attendees if they went to the town hall meeting last year. No. Did they know there was a town hall last year? No. How did you hear about this one? Well I got this email. 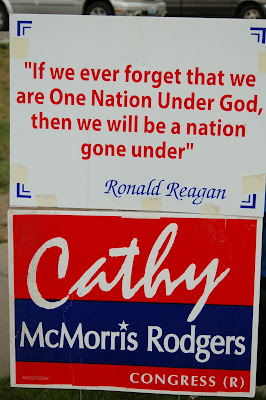 More McMorris Rodgers supporters held up signs outside the Lincoln Center. According to her guidelines signs were not allowed inside. The hired security staff announced and enforced the rule. A number of people were disappointed but nobody raised a ruckus about it. A thunderstorm passed by and several sign holders used them to ward off the rain that was encouraging them to get inside. The doors opened at 5:15 and we filed in. 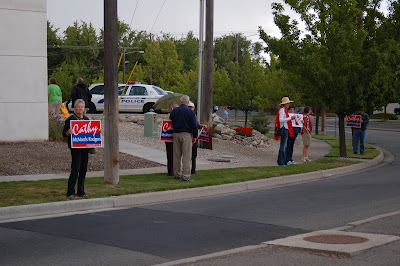 Once inside, you received a program with two tickets, one to leave in the tumbler if you wanted a chance at asking a question. Patriotic music played as the room slowly filled. I was busy making some notes when I noticed everyone was standing. I asked the man next to me what was going on. The national anthem was playing over the speakers and once one person stood up then everyone followed suit. 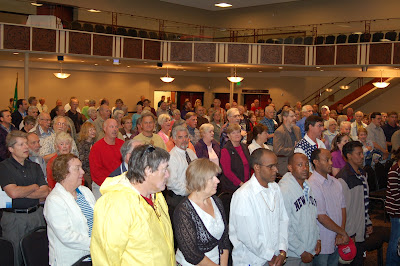 Well, I had to take a picture of that. About 10-15 minutes later the national anthem played again and everyone repeated the process. Pavlov was right.

After the flag was posted and the national anthem was played again, our Congresswoman took the stage and question time began. The questions varied widely as the randomly drawn numbers beckoned the lucky winners to the microphones. The lively crowd ignored the pre-meeting warning that hecklers and interrupters could be removed. Jeers and cheers were evenly matched as the crowd seemed to be evenly divided on...oh...pretty much everything. 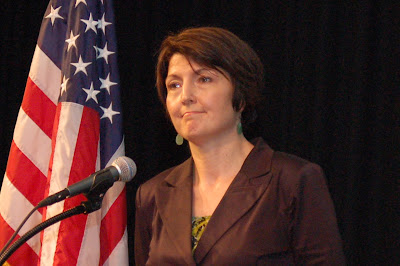 McMorris Rodgers kept her composure most of the time. Softball questions allowed her to stay on the talking points and speak forcefully on reining in the EPA and other government regulatory agencies, repealing health care reform, not raising taxes, etc. The occasional pointed question on raising taxes, ending the wars, health care--especially for seniors--brought stuttered answers followed by a change of subject. The edge in her voice was noticeable when she got testy with someone making a comment on the minimum wage.

When the subject of jobs came up, she told us to look at gop.gov and see what the Republican House had done to promote job growth. For someone who would go on about plenty of subjects--and get heckled for wasting time--I thought it was telling that she wouldn't articulate any specifics.

A young man, wet from riding his bike there in the rain, expressed his disappointment in McMorris Rodgers for supporting a decrease in Pell grants. In her reply she said she knew how expensive college was and she said she was still paying off her student loans. According to her bio she earned an executive MBA from UW in 2002. So it would appear she doesn't see long term student debt as a problem.

The meeting wrapped up quickly at 7:15. With the number of people who wanted to participate, I think it would be appropriate for her to hold a couple more town hall meetings but I don't see that happening. The slightly raucous nature of the crowd--on both "sides"--forced McMorris Rodgers to bring her A game which is how it should be. She was uncomfortable several times when forced outside of her well-framed talking points, but she held up pretty well.

While the meeting was interesting, enlightening and fun, don't expect her to change anything.
Posted by Hank Greer at 9:41 PM