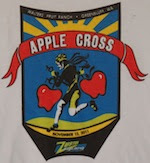 I finally got what I wished for. Yesterday's snow helped create a soggy bottom course for us up on Greenbluff. I scouted out the course. The run up was pretty devious, an off-camber climb up a hill with a steep sharp left turn followed by more uphill climbing. Several long stretches with muddy 180-degree turns. Lots of slippery track and then there was this one corner that was particularly treacherous. 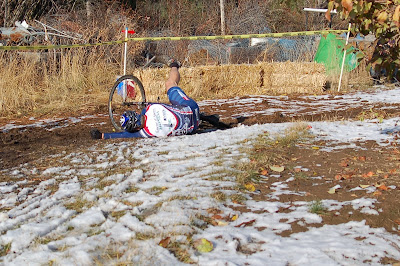 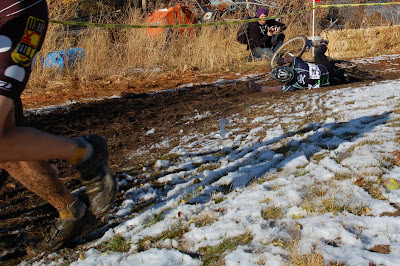 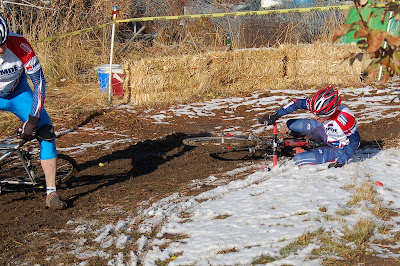 I got off to a good start. Well as good as it gets sprinting uphill in mud, but I thought I was doing better than I did in other races. After the run up I tried to jump back on the bike while everyone else kept running. I missed and several riders passed me by while I floundered. Several long stretches with the 180 turns followed the hill and I picked one rider off at each turn. Proud of myself for gaining some ground I came into the treacherous turn from the right side intending to cut across in the turn and go up the left side. It worked too well. I was going too fast and my back tire lost traction, spinning me completely around and tossing me into the mud. All those guys I just picked off, and maybe a couple more, rode on by. That was the only time I crashed. 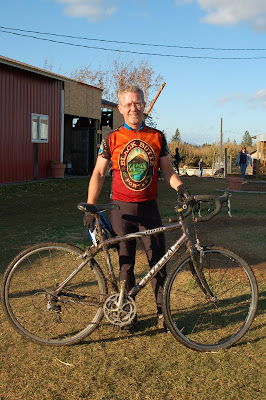 After the field stretched out I ended up battling with a couple other guys for three laps. They would pass me and then I'd get by them when they'd wipe out at corners. Keeping my cool and a steady hand, I worked the corners well. The bike and I got very dirty. I think my bike had just as much fun as I did. 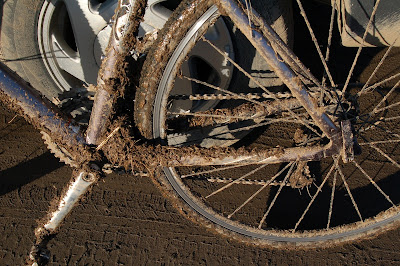 Yeah, that was a treacherous turn, I think I only managed to ride it smoothly on the last lap or two. Fun course, muddy, snowy, a bit of everything. First time this year my race number came home dirty - at the 2nd to last race!
Scott