The last race of the series was brutal for me. There were parts of the course where the snow was packed by the earlier races, but much of that was breaking up as the day wore on. The temperature slowly climbed nearer to 32 and the packed snow started breaking up. Much of the twist 'n' turn part was a mixture of loose snow and dirt with just a touch of slightly liquid mud.

I think I fell six or seven times. And for each time I fell I think I made two saves. It was amazing how often my front tire would suddenly dart off to one side or the other threatening me with impending disaster. Slowing down was a challenge since the brakes were iced up most of the time. I understand you're not supposed to use your brakes anyway so I got to try that out. It worked out well--except for those occasions when I couldn't make the turn and headed through the tape marking the course boundary. 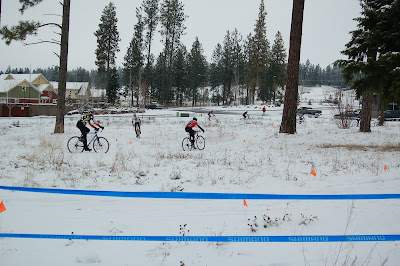 Racing on the Coeur d'Alene tundra. 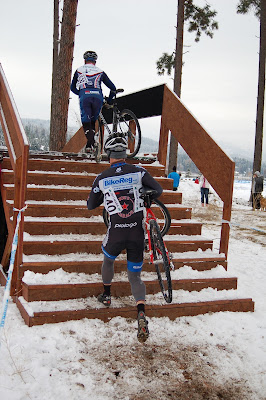 The run up was pretty cool. 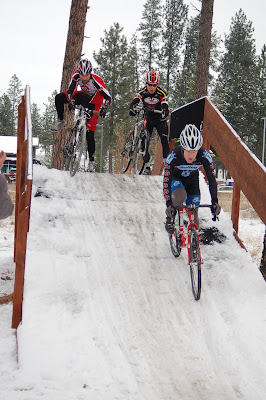 Followed by a ride down.
I lost control and crashed here on my practice ride. 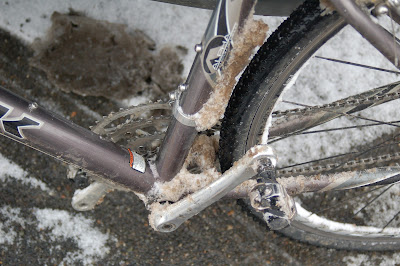 I had to use my car's ice scraper to remove these chunks. I cranked up the heat on the ride home to melt off the rest.
And so ends this year's cyclocross season. It was a blast. Next year I'll be back but on a bike better suited for the task. Glen is building one for me. It'll be awesome.
Posted by Hank Greer at 5:32 PM