We drove over to see Josh at UW on Saturday and were treated to the sight of a squirrel scurrying by with a donut in its mouth. (Didn't have my camera with me to catch that.) Later on we headed down to Lakewood at stay at my brother John's house. He and I entered the first two races put on by Seattle Cyclocross at Ft Steilacoom this morning. We entered the men's Cat 4 and the men's masters 45+ (John in black and white jersey below) and masters 55+ (me in yellow jersey).

The course was heavily frosted and stayed that way in the shaded areas so there were a number of slick spots. During the first race I had to go around crashes twice in a grassy twist-and-turn section. On the third lap of the first race I picked up some road rash on a downhill that ended on a muddy trail and then made a very hard right turn onto a bark covered trail. My right shifter was acting funny after that. When the race was over I removed a chunk of bark from inside and I was set for the second race. On the last lap of the second race one of the Cat 1 women passed me just before this downhill. I figured that since she probably knew what she was doing I would just follow her track. I guess I was off just a bit because my front wheel caught something and next thing I know I trimming branches off a tree. Removing them from my bike cost me a bunch of time. The run up on this course was especially entertaining and challenging. It was about 100 feet long and led off with three obstacles spaced 25-30 feet apart.

The races were fun and it was great to hang out with Josh, John, Susan, Jasmine, and Bekah. 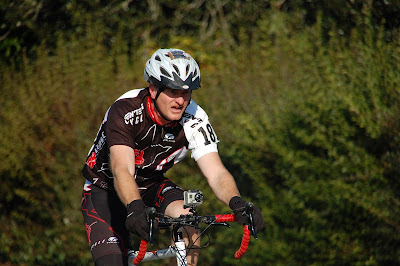 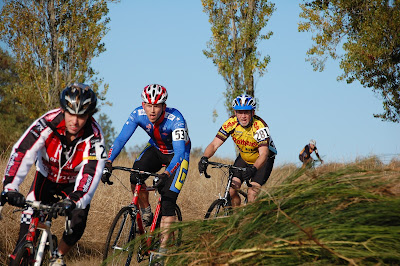 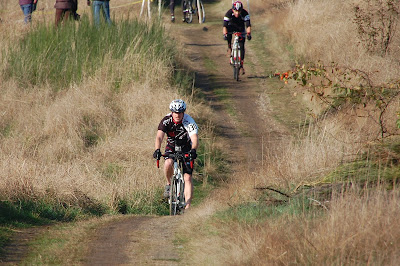 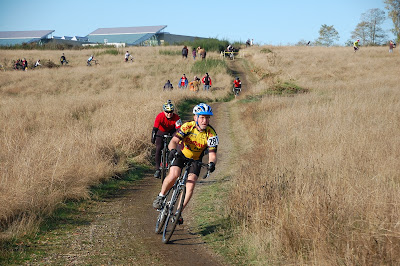 All photos by my sister-in-law, Susan.
Posted by Hank Greer at 7:01 PM