Misrepresenting To Those She Represents

I would never make a good politician, if good means talented at misleading, distorting, deceiving and the like. On her Facebook page, Cathy McMorris Rodgers recently posted a quote of the day.

"Somehow, we have to figure out how to boost the price of gasoline to the levels in Europe." - President Obama's Energy Secretary, Steven Chu. Do you think they're succeeding?

The quote came from a Wall Street Journal article published in December 2008, before Obama was sworn in as president and before Steven Chu became the Secretary of Energy. Presented in this manner and followed by the question, "Do you think they're succeeding?" where "they" refers to Obama and Chu, one is led to believe gas prices are purposely being raised by the administration. 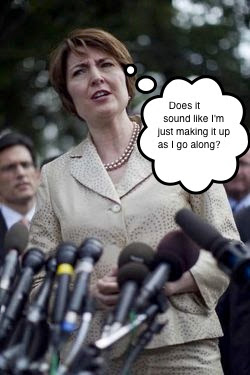 Along with the quote the congresswoman provided, the WSJ article also reported:

But Mr. Obama has dismissed the idea of boosting the federal gasoline tax, a move energy experts say could be the single most effective step to promote alternative energies and temper demand. Mr. Obama said Sunday that a heightened gas tax would be a "mistake" because it would put "additional burdens on American families right now."

The congresswoman's deception implies the Obama administration is responsible for rising gas prices. She doesn't tell us that US oil production is at a seven-year high. She fails to mention that US oil production started rising in 2009 or that the US tripled its oil rigs during the last three years. Nor does she mention that the US exported more gasoline than it imported last year, that demand for gas is down, or that speculators are driving the price up. Instead, she presents a quote out of context for the purpose of laying blame on the Obama administration for rising gas prices--for the wrong reason. Now, had she said the Obama administration was failing to reign in oil speculators, then she'd have a strong case.

Today, on her Facebook page she shared this from the Republican Study Committee. 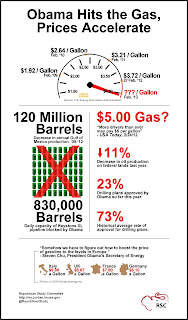 Gas prices have nearly doubled since Obama’s inauguration, and energy analysts predict that more Americans than ever before will pay $5.00 per gallon this year.

You would think that with gas prices continuing to accelerate under President Obama, he would do everything possible to boost production.

Instead, oil production on federal land fell 11% last year. During the exact same time frame, oil production on private and state-owned land – land beyond the federal government’s grip – grew 14%. In addition, Obama prevented construction of the Keystone XL pipeline, which could bring our economy thousands of new jobs and transport 830,000 barrels of oil a day.

Again, the fact that oil production has increased is left out. And there's no mention that the purpose of Keystone XL is to make Canadian tar sands oil available for higher prices on the world market. Nor are we informed that Keystone XL will raise gas prices in the US.

And that's why I wouldn't make a good politician. My conscience would bother me fiercely.
Posted by Hank Greer at 7:12 PM