*** Note: I originally posted this with the title, "A Gutless Call". I used that title because I was in a rush after writing up the post. It was wrong because that title impugned Mr Graham's character. It bothered me all day long so I'm fixing it now and I apologize for my error. I also added a link to more information about the Louisiana Science Education Act.

In yesterday's Spokesman Review, Gary Graham, News Editor, offered a tepid defense for not printing the series. You'll notice there isn't a single comment that supports the decision not to print.

The Spokesman-Review has chosen not to publish the Doonesbury comic strip series this week on the Texas abortion law, opting for a series of substitute panels offered by the syndicate that distributes the strip. At last count, nearly 60 newspapers across the country have decided not to use the controversial strip.

Doonesbury appears six days a week in the classified section because many years ago the newspaper’s editors removed it and the Mallard Fillmore comic from the editorial page. The decision at that time was based on two factors: the often political nature of the comic strips and the space required for them.

When those two features were moved to the classified section, they fell under the jurisdiction of the advertising department. Dan Johnson, director of sales and marketing, made the decision to substitute for the Doonesbury series this week, a decision I strongly support. It is our view that abortion is not an appropriate topic for a comic strip. We regularly publish news stories and opinion pieces on the elections, abortion and many other controversial topics in more appropriate sections.

Why does this excuse not hold water? First, he states that Doonesbury often has a political nature so he's aware that it's not like your funny, as in "Ha Ha", comics. Second, he states that abortion is not an appropriate topic for a comic strip, as if he's referring to a funny, as in "Ha Ha", comic and not one that routinely has a political nature and was banished to the want ads section years ago.

As to the subject matter of the strip, it is not about abortion. It's not pro-life and it's not pro-choice. It's a parody of legislation passed by the State of Texas. It's about the intrusion of government by people who claim they want less government intrusion and more individual freedom. It's about the obstacles placed in front of women to demonize and shame them should they seek an abortion as if that decision comes as easy as choosing what to have for dessert. It's an opportunity to examine who we are as a society, much like this comic printed by the Review last July in the Sunday comics section that parodied the Louisiana Science and Education Act. 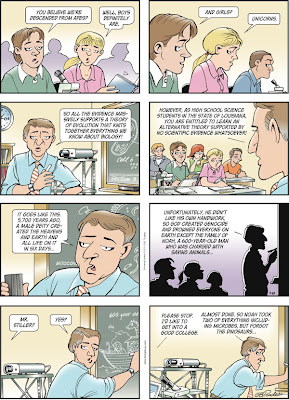 It makes you think, doesn't it?

The violence in Pearls Before Swine and the mockery and idiocy found in Dilbert are apparently appropriate topics for comics. Thank goodness the Review's role as gatekeeper protects us from the topic of abortion. I'm not including the censored Doonesbury strip in this post because it's so easy to find since so many papers decided not to print it. Imagine that. Censoring it made it more popular.
Posted by Hank Greer at 7:21 PM