A Bastion Of Freedom And Democracy?

When you kill civilians in person it's a war crime, as it should be. 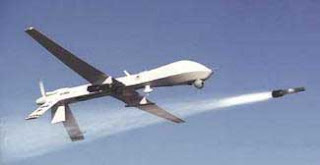 When you kill civilians with an unmanned aerial vehicle it's...um...regrettable?

And just as it does with surveillance and monitoring of Americans, Congress aids and abets even when simply doing nothing.
Posted by Hank Greer at 5:49 AM

The House should impeach Obama so he can explain his actions to the Senate. There is a significant bill of impeachable high crimes and misdemeanors now.

I would also ask why Obama is not prosecuting Panetta and threatening Kathryn Bigelow, as he has Manning and Assange? Why is the adminstration happy with some leaks but willing to imprison, kill, and violate the Constitution for others?

Doublethink means the power of holding two contradictory beliefs in one's mind simultaneously, and accepting both of them.”
― George Orwell, 1984

It's official. Not only has Obama not arrested Keith Alexander, the White House has actually praised the NSA for violating the Constitution.

Here's what Alexander has to say:

"The great irony is we’re the only ones not spying on the American people."

Yeah right, you antiAmerican scumbag liar. You should be in prison and your massive NSA kingdom torn to the ground.

Maybe Al Gore or some other bigwig who still has a conscience can lead an Occupy NSA movement. They already busted Gore for hookers, dude probably has nothing else in his phone calls to hide.

We are in a totalitarian freefall.

We have met the terrorists, and our taxes pay for them.

A couple great, Fascist moments in the Holder hearing today.

"To my knowledge there has not been any citizen who has registered a complaint. It has proved meritorious because we have collected significant information on bad guys, but only on bad guys, over the years."

Senator Chambliss, we can't complain if the program is secret, though, if you actually check the record, many of us have complained about what we suspected. In any case, you incompetent ninny, Constitutional rights are not predicated on complaints, but rather inalienable.

The current regime is being undone by its sheer lunatic self-deception. I realize now why some people found Hitler not only terrifying, but hillarious.

We haven't really heard from House Tea Partiers yet. I assume they're having a "Ben Stuckart moment" trapped between corporations and actual citizens. But I suspect the citizen will win on this one, too fundamental.

I'm hoping Holder, Judge Vinson, and Obama will be impeached in that order, or all at once.

What a great show it would be.

Though I'm no Gore fan, it would be a wonderful symbolic bookend if he could somehow (legally) get the Presidency after an Obama resignation.

Russ Feingold, the only Senator who voted against the initial Patriot Act would better replace Obama.

And now Prizm! Ha, maybe the Spokane City Council is a microcosm of Obama's admin with their secret corporate meetings and agressive city-wide surveillance program.

The President at least, is political toast. The discepancy between his statements and actions is now so wide that Americans have to assume he is mentally ill. His pursuit of leaks also shows paranoia, of both excessive and legitimate varities. Obama has lost control of the federal agency apparatus, and the trad media is no longer differing to him. I swear we didn't steal your strawberries, President Queeg!

Also, what's with his silence? Is he wandering the White House halls, having conversations with Nixon's portrait? Fire in the Lincoln bedroom with the AC blasting? It's hard to imagine Kerry as Kissinger. "On your knees WASP boy and pray"?

Why not Wyden or Udall? Just not Biden or a fucking Clinton or Clinton lackey.

Watching Democrat pundits try to lessen the damage all day, only to be blindsided AGAIN.

Nobody is talking "nonscandal" anymore.