Because Bartolomé de las Casas is far more deserving of being remembered today than Christopher Columbus. (From The Oatmeal.) 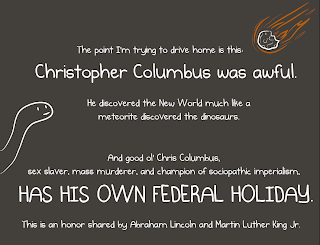 "I saw that they were very friendly to us, and perceived that they could be much more easily converted to our holy faith by gentle means than by force, I presented them with some red caps, and strings of beads to wear upon the neck, and many other trifles of small value...Weapons they have none, nor are acquainted with them, for I showed them swords which they grasped by the blades, and cut themselves through ignorance..." Columbus, October 11, 1492

"They came loaded with balls of cotton, parrots, javelins, and other things too numerous to mention; these they exchanged for whatever we chose to give them. I was very attentive to them, and strove to learn if they had any gold." Oct. 12, 1492.

"I do not, however, see the necessity of fortifying the place, as the people here are simple in war-like matters, as your Highnesses will see by those seven which I have ordered to be taken and carried to Spain in order to learn our language and return, unless your Highnesses should choose to have them all transported to Castile, or held captive in the island. I could conquer the whole of them with fifty men, and govern them as I pleased." Oct. 14, 1492.

You too, can own the sword of Columbus.