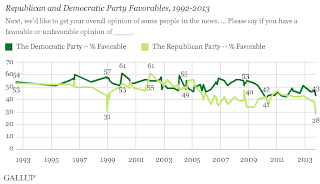 Republican favorably is dropping.
Posted by Hank Greer at 8:44 PM

What a surprise, hubristic Democrats have already been denouncing Republicans as terrorists:

Of course, the media is condemning the McCarthyist Pfeiffer for using the n-word in a typo rather than the t-word intentionally.

Are there any adults in DC? How is this better than Bush?

Rejoicing in bad poll numbers for Republicans, with the country on the brink of default?

Here's those numbers in broader context:

Most Americans disapprove of the way Obama is handling his job, the poll suggests, with 53 percent unhappy with his performance and 37 percent approving of it. Congress is scraping rock bottom, with a ghastly approval rating of 5 percent.

Indeed, anyone making headlines in the dispute has earned poor marks for his or her trouble, whether it's Democrat Harry Reid, the Senate majority leader, or Republican John Boehner, the House speaker, both with a favorability rating of 18 percent. NPR, Rasmussen

Yeah. Way to go Democrats. Americans are SO excited by your performance.

It's time for a progressive alternative.

This game is at the beginning of its end, the main playerrs have already finished off camera and are drinking gin in a leathery clubhouse.

Elite backers of Democrats and Republicans have joined to force a settlement. Expect a temporary continuation proffer, followed by a "clean" bill with some tax changes.

I use scare quotes because the budget Democrats have been defending is actually pretty scary for average Americans.

Plutocrats to the frescue. "Get the body bags." Democrats and Republicans swinging at worms and posing for the cameras. Viagara commercials, the grey haired CEOs and their trophy wives.

It is kind of like watching crappy 1970s TV.

But back then at least we had three channels.

General Alexander agrees that the budget impasse is nearly over, and attention will reurn to Obama's fascist surveillance program.

I do feel it’s important to have a public, transparent discussion on cyber so that the American people know what’s going on...And in order to have that, they need to understand the truth about what’s going on.

And then the President's chosen perjurer tried a little contortion, which made his pose sound a bit less than sincere:

we do, I think, more to protect people’s civil liberties and privacy than they’ll ever know.

If we the people can't know the NSA's 4th Amendment behavior in oversight manners described by the Constitution, particularly by the congress and (real) courts, that is not democracy, nor is the Generalissimo offering a transparent or public discussion.

The real question now is how long Democratics will draw out the budget debate to distract from Obama's violations of the Constitution, Sensenbrenner's PATRIOT reform bill, the surprisingly persistent Obamacare glitches, and the dawning realization that the Democrats' hotly defended budget is itself a turkey.

This week, Democrats go into contortions to prevent an inconviently early budget agreement while trying to sound pro-agreement.

More news you won't read in the land of the free, with the defecit as an excuse: Obama's torture program at Gitmo. Remember how he promised, again, to close it? As President, he can close it unilaterally, at anytime. He certainly could stop torture there, but has has chosen not continue it instead.

Gitmo never even makes a US paper anymore.

Democrats LOVE the budget impasse. They get to pretend to be the good guys again.

Democrats are creeps, voyeurs, and liars. Also, they are criminals violating the First, Fourth, Fifth, Sixth, oh hell, the whole Bill of Rights.

But what now? Another illegal war?

Good luck with that.

Democrats and Republicans have readied a "clean" bill (minor tinkers), though as a medium term continuance. Our predictions were mostly on course. Though we expected a full term budget to pass, it makes sense politically for both elite parties to keep the distracting debate alive. Non-resolution makes sense for the intelligence Junta and corporate elites who control the parties as well, since the debate has distracted from the NSA revelations.

The agreement neatly skirts default (a genuine worry for even the globalized elite class), but a break was also necessary because the drama was increasingly stale. The question remains whether the return of the budget debate in Jan/Feb can effectively screen out further NSA revelations. While the pundit class chews eagerly on every budget twist fed to them, they are losing their audience. Both parties have incurred catastrophic losses in confidence. We the people are starting to perceive the budget impasse as a charade.

Cue Greenwald, Poitras, and Snowden. We're amazed, and a little tickled, they communicate daily, apparently by encryption. We air-gappers are too dumb for online cypher stuff, but we'd like to believe in it. Apparently Miranda's stuff was only compromised because he carried a key. Anyway, Greenwald has warned the most disturbing revelations are yet to come.

Can the Junta, elites, parties and administration continue to divert attention from the NSA revelations? We don't think have, or can. Something passive, but fundamental is changing, particularly online. We are becoming a closed Stasi style culture. Even on the streets--the Google surveillance truck was driving around Spokane yesterday and we watched people flipping it off. Stasi cultures breed noncooperation and insincerity to a breaking point when opportunity triggers change.

The NSA-corporate spy revelations matter more than short-term party popularity fluctations can measure, particularly with both parties defending surveillance. But, people are increasingly alienated from their governing elites, and the break, when it comes, may be a very sharp one. Orwell was wrong: The very tools of distraction the elites are using--austerity, war, disinformation, newspeak, paranoia--themselves destabilize long term social order.