I got the beater ice bike out yesterday and today. I was hoping the frozen snow would hold up my weight but that wasn't about to happen. I could almost walk across the snow but one foot would fall through the crust half the time. When I put all that weight on two tires, I wasn't going anywhere.

It was awkward, ridiculous and funny while I tried getting on a bike that was resting on top of eight inches of snow while I was standing on the ground. It's like I was trying to get a leg over Bill Walton's bike. Not in this lifetime. 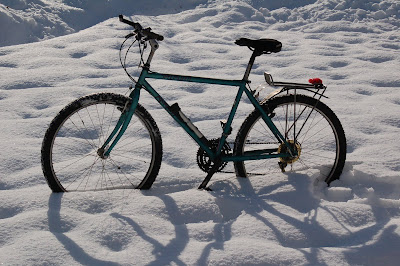 So I kept it on the roads during my riding. It's not as fun and adventurous as riding through fresh powder like we did on Black Friday, but at least I was rolling.
Posted by Hank Greer at 7:57 PM