Great Day For A Run

The sun shone and a refreshing cool wind blew today at the Spokane River Run. I've been on very few of the trails in Riverside State Park so I got a grand tour today. About 250 people signed up for the 25k. I figure I finished somewhere in the top 249.

Even though I'm trying to chill during my runs this year, I found I was comfortably keeping pace with a group running at just under a nine-minute mile. As hard as I tried to slow down, my mind just wouldn't let go of the psychology involved when you have people passing you. Fortunately the long climbs after mile three slapped some sense into me. There's something about walking up a hill that makes you realize you should conserve your energy. Okay, I should conserve my energy. 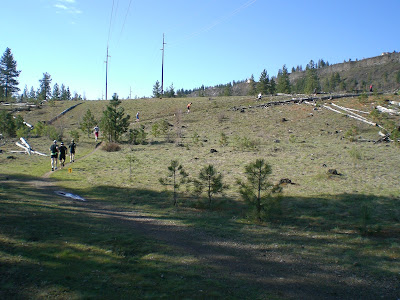 Beginning of the first climb after mile three. 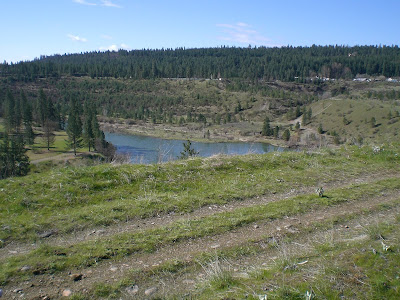 A great view from the top. We dropped down to the river way off in the distance and looped back once we hit eight miles. 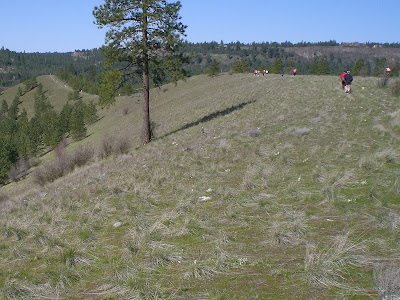 The path along the high ground. 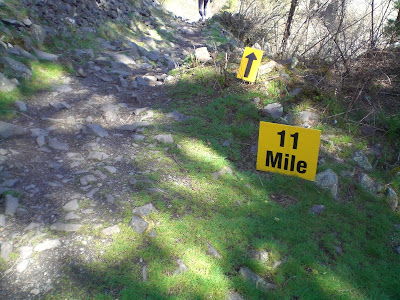 Had to pick my footfalls carefully here, but I was happy to be on the downside.
The Vibram Bikilas held up well. (I saw one other runner wearing Vibrams.) Around mile four or so there was a lengthy piece on a basalt railroad bed that was uncomfortable. Even those wearing shoes didn't like it. I took a couple of sharp pokes in the arches. There was a great view from there but it was more important to see where your feet were landing.

I don't listen to music while running because an MP3 player is one less thing to carry. I find I get a song in my head that matches the pace I want to run. Today's song was Josh Ritter's The Curse (nice video BTW). The waltz-like beat, one-two-three-one-two-three, was just the ticket.

I ran into Evil Elf at the finish line. Congrats to him, his wife, and their son for garnering awards in their respective races. He was kind enough to take a photo of my ragged self. Blech! This is not a criticism of his photo taking ability. I mean, just look at what he had to work with. My ballooning shirt makes me look like I chowed down on all the snacks at the water stations. 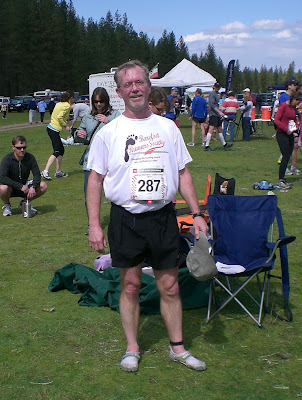 Proof that I look best from a distance.
Posted by Hank Greer at 3:49 PM

Thank you, Al and Geoff.

Nice work! Remember, the camera adds 10 pounds. At least, that's what I told myself.

Don't worry about it, Hank. It just looks like a case of post-run gas that had nowhere else to go. Who hasn't been there.

No way I'm going to run in bare feet--causes bloating.

Too funny, Anon. Next time I try a drop of Beano on my toes.