If Bikes Could Talk

For the past couple of weeks, the Elephant has been giving me a sad you-don't-ride-me look quickly followed with a scornful when-was-the-last-time-you-blogged-about-me glare. It's been idle for almost a month now and hating every motionless minute garnishing the garage and suffering through the same boring glimpse of the neighborhood when the door is raised. And now it was giving me the silent treatment. I apologized for neglecting it and asked, "What would you like to do?" 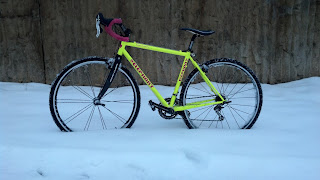 "I want to ride the Children of the Sun Trail."

I was more than happy to oblige. Even though I've been running a lot, my seat bones have been turning into sofa bones and besides, I've really missed riding. Plus there's this thing coming up in four weeks.

The photos are of the second half of the ride. 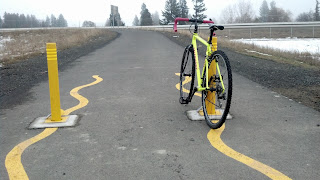 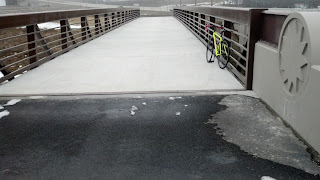 The bridge crossing over Lincoln.
"We're maybe 100 yards from the start." 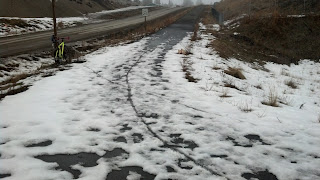 The 90-degree turn at Fairview and Freya.
"Never come in hot even when it's clear." 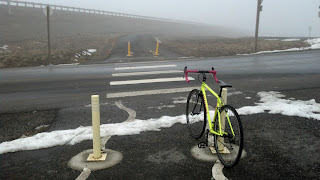 Crossing Fairview.
"Look both ways. I don't want to get hit." 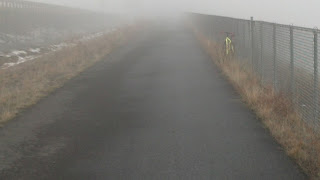 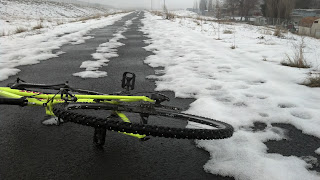 Next to Mead. Bike pose à la John Speare.
"I can't believe you put me on the ground." 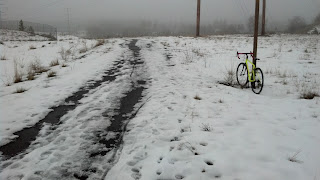 Approaching Farwell Road.
"Oh, quit being a baby about the snow." 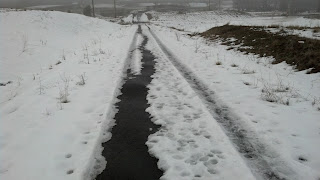 The descent towards Farwell.
"Hey, I'm not in the picture!" 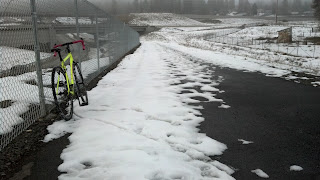 On the way to cross over Hwy 2.
"See how the pictures look way better with me in them?" 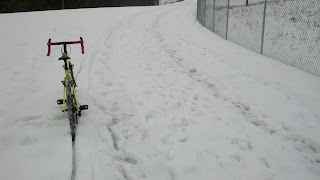 Approaching Farwell Elementary.
"Wait for it." 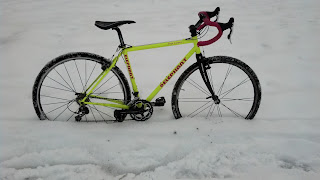 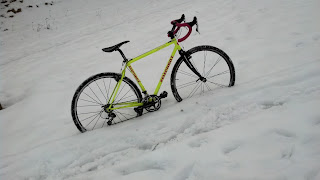 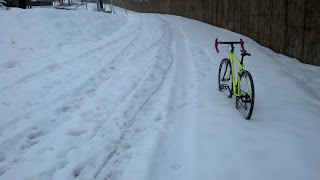 The last bit before I got off at Northwood Middle School.
"Never mind his gratuitous attention getting. Check me out!"

As you can see from the end, in the beginning I struggled through snow. My cycling muscles complained even after being called out as cry babies by my running muscles. Once I crossed over Farwell Road there was an increasing amount of clear asphalt on the trail and after passing by Mead, the trail was almost completely clear all the way to Freya. My cycling muscles found their rhythm and even got to taunt my running muscles when I had to heft the Elephant on the climb near Northwood Middle School on the way back.

A bucket of warm water, followed by a towel dry, a wipe down, and oil on the chain and the Elephant returned to the garage placid and content.
Posted by Hank Greer at 7:13 PM