Ian Searle is the younger of the two and his race was at 10:30 am. The whole idea behind 'cross racing is that the course contains a variety of surfaces and degrees of difficulty and 'cross racers normally take pride in just completing the course, let along overcoming the sand, mud, grass, run ups, obstacles, etc. This being the world championships, race conditions in Louisville were extremely challenging. 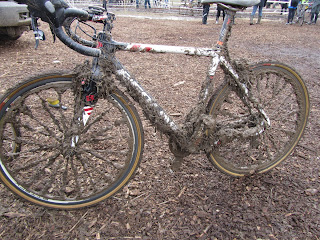 This is Ian's bike when he finished. He said he didn't need to use his brakes. To slow down he would just stop pedaling. He noticed that the top racers were changing out their bikes at the pits at every half lap. Yes, the course was so muddy they changed bikes every one-half lap.

Buff Hopper's race was set for 3:30. Since, like Ian, Buff only had one bike, Ian loaned him his. Buff swapped bikes every half lap and, in a sprint finish, ended up one-half of a bike length behind to take 4th in the Men's Master's 60-64. Frickin' hard core.