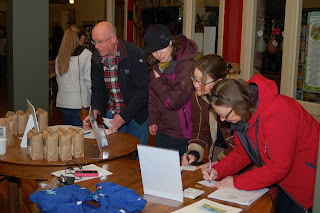 Signing up for membership, door prizes, and more. 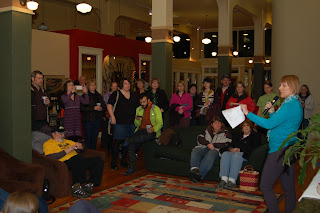 In between drawing names for prizes, Barb talked about Spokane's influence on statewide cycling.

When it comes to cycling, Barb is animated, passionate, and neck deep in facts. Concerning the $25 dollar tax on bicycles proposed as part of a transportation revenue raising bill, she says that even if it does go through, we still lose because not enough money goes to bikes and pedestrians. Plus, the amount of money raised over 10 years might come to one million dollars, a drop in an ocean of several billion. A former Idaho state legislator herself, Barb says it's easy for legislators to be against something. She works to make them for something, in this case investing in bike and pedestrian infrastructure. It's an underdog role that she energetically assumes, chipping away at vehicle-centric bias by emphasizing the many contributions bicycles make towards people's health, the economy, the environment, and the infrastructure.

When Barb was interviewed for her current position at BAW, she was asked if she had Share the Road license plates on her car. (BAW sponsors those plates.) Her plates advertised WSU, her employer at the time. She has since switched. A point she makes about the plates is that they are the only special plates sending a message concerning driving behavior--share the road--while all other plates reflect an affinity with an organization, interest, or hobby. Share the Road has always been more than an affinity for Barb. For her it's a passion.
Posted by Hank Greer at 9:06 AM