One of Kathy's relatives who lives in the Midwest sent her an email containing a link to a site with an article about a Spokane mom who makes thousands of dollars a month using her computer. That right there is a clue that a scam is on the horizon. I downloaded the image of the Spokane mom named Theresa Andrews from the site and searched for it using the Google. 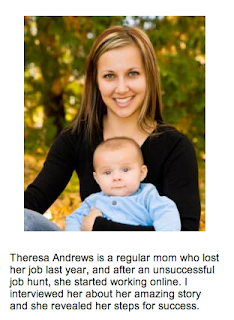 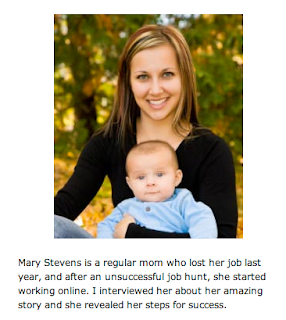 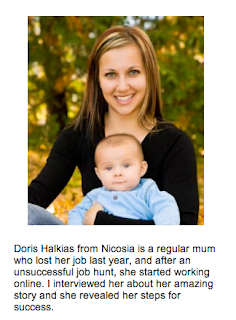 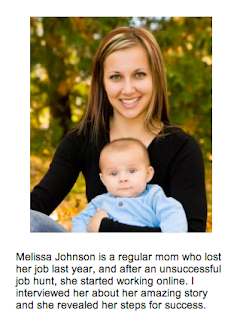 Notice the sites give the appearance they are news sites. A couple of them somewhat honestly display "Advertisement" or "Advertorial" at the top, but it's not that noticeable. It doesn't look like Kathy, or anybody else, is going to make thousands of dollars with her computer.

This scam has been around for a couple of years now. It appears to be a news report. You pay some money thinking you're going to get in on making riches, (which you might be if you were the one making the fake ads), and you get screwed.
Posted by Hank Greer at 8:24 PM

Hey, a girl has the right to reinvent herself right?

Speaking of reinvention. Was the 2008 Obama who denounced Bush legalisms a fraud?

Or is this one:

Was is the moral responsibility of Democrats who voted for Obama, and encouraged Americans to vote for him and send him money?

Will any Democrats be honest enough to oppose the Fascist fraud Brennan?

Or is the Democratic Party nothing but a fraudulent confidence scheme?

Triumph of the Shill said...

Obama authorized the release of the DOJ memo to Isikoff. The text of the memo itself lends to an interpretation that it was written for this purpose. The memo is not a legal argument, but a summation, with no likely audience other than the US public and Congress.

The President is building a hedge against future domestic murder charges in the event of a full return to the rule of law within the US, or international war crimes prosecutions on the Nuremburg model. If Congress knowingly signs off on Brennan, who embodies Obama's illegal approach, Obama will have succesfully implicated the American public.

The Obama administration's most specific legal problem is that it hasn't been able to rationalize the President's decision to kill 16year old American citizen Abdurahman al Awlaki in Yemen, far away from a war zone. Despite changing theories floated to the press, the hit looks increasingly like a case of revenge murder that the administration meant to keep secret. But, the kid's family found out, and it would be a lot, even for this President, to whack a whole family, including hits on US soil.

Obama's "Executioner-in-Chief" legal theories, which specifically exclude a role for the courts to defend civil liberties, are also unfortunate foreign policy. Israel and India's elites are both openly discussing emulating Obama's drone approach in their media. If India hits nuclear Pakistan from the east, for example, as Obama's personal drone force hits from the West, Pakistan will likely respond in ways that could trigger a wider conflagration in South and Central Asia.

But, the possibility that Obama is getting nervous isn't such bad news. It may mean there is still some power in democratic processes. But, we'll only know we're back to democracy when Obama moves to Sheboygan and starts hocking get-rich-schemes on the internet under an assumed name and Melissa-Jane-Mary's photo.

Obama's order to release the actual memos pretty much does confirm that the original "leak" was his own. Note the lack of an investigation. I suspect someone in congress, not in on the original deal, called his bluff.

The NYTimes news story is a puff, so you have to wonder what else they know. Supposedly, all the thousands killed by drones were al Quaeda leadership, yeah right. Also, no mention of memos on the hit on al-awaki jr.

If Obama wants cover for his illegal drone program, it's gonna come down to his rationale for murdering children around the world.

Time for an accounting, and the UN, worried about drones spinning out of control worldwide, is breathing down Obama's neck.

The world-is-flat crowd lectures us endlessly on the interconnectedness of the world.

Then they magically think we won't know about their 'secret' drone war, as long as they redact some paper memos.


Brennan is a very stupid, short-sighted fellow. Obama's smart war is dumb, and not sustainable. How do we win a micro-arms race? What's the long-term strategy?

We need new political leaders who realize that US survival depends on the rule of law in an interconnected world with increasingly dispersed and equitable offensive capabilities.

I wrote about same thing in my blog: http://www.sivutuloja.com/2012/12/spam-spam-spam-alkaa-menko-retkuun.html (It's in finnish). I noticed only the Career Journal, which I found as an advertisement in Alexa.com. The Career Journal can be found in different versions for different target audiences (nationalities).