Last Saturday I spotted an open house invitation on 7,000 so Steph and I went today. A Jesuit volunteer named John showed us around. John was graduated from Santa Clara last year and decided to commit to working for a year as a Jesuit volunteer. He said he still trying to figure out what he's going to do when he finishes in August. 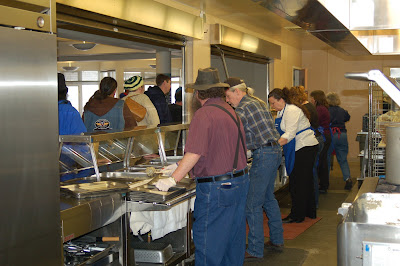 Along with housing assistance and medical care from volunteer doctors, the House of Charity provides clothing and food for the homeless and other people in need. Although they do prepare a small breakfast and a modest dinner, the main meal they provide is lunch during which they serve 150-200 people. The kitchen is the primary volunteer opportunity in which you can help prepare the food, serve it, and clean up afterwards. 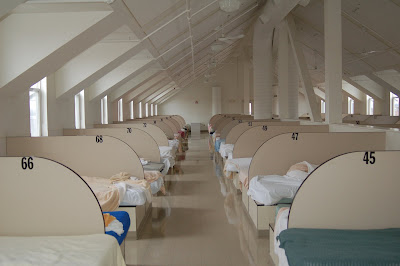 They also have 114 beds for men. It's a real interesting system. The men are awakened at 6:45 am. They turn in their pajamas, put their own clothes back on, retrieve their property and clothing from their locker, and go outside. The house opens at 7:30 am and the men who just went outside can come back in and sign up for a bed. Those that had a bed get priority, so as long as they sign back up every morning they can have a warm and safe place to sleep for as long as they want. Some people have done so for over a year. At 7:30 pm, those that have a bed lock up everything they have in a locker, take a shower, put on the pajamas provided for them and go to bed. No personal property whatsoever is allowed in the bed area to prevent disturbances as well as theft.
Posted by Hank Greer at 4:31 PM