It Was A Very Good Year

I have a great fondness for old books, mostly because they're so entertaining. I have some medical books that are shockingly hilarious today but were serious texts at the turn of the last century. 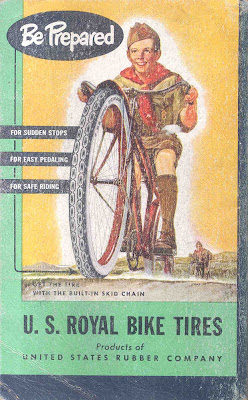 My brother Robert found a Boy Scout Handbook that was printed in the year of my birth. One of the things that struck me were the advertisements. This is the back cover. I wonder what a built-in skid chain is/was. 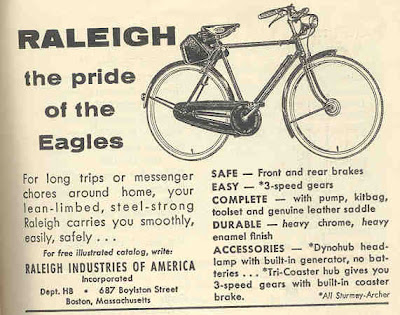 Along with Raleigh bikes there are ads for things that would appeal to every young man age 11-18: Winchester rifles, Remington rifles, Lionel trains, Kodak Brownie Bulls-Eye camera, Baby Ruth candy bar, RC Cola, Coca-Cola, Bendix brakes, and Bike athletic supporters (It protects you where you need it the most).

Some of the merit badges are for things many of us never have done: rabbit raising, hog and pork production, railroading, and poultry keeping to name a few. 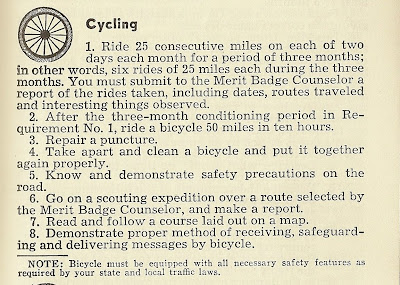 These were the cycling merit badge requirements. Remember, most kids had single speed bikes back then. Compare these with the current requirements.

There's even an ad for Schrader valves which makes me wonder what other types of valves they had to choose from in the 1950's. Did they have Presta back then? Were there Schrader copycats horning in on the tire valve market?

Sent by my aunt:

The rifle ads reminded me of a great gift given to your editor/publisher uncle while he was in high school. He had 2 paper routes in Spokane; The spokane chronicle and the SR. He won a top prize for getting subscriptions one year....a small rifle.