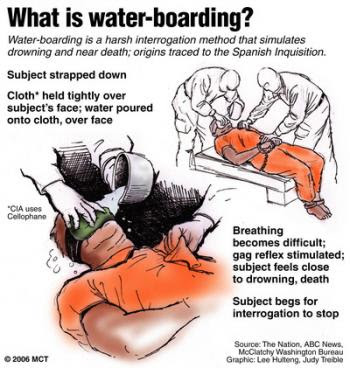 Charles Grodin was apparently able to goad Hannity to agree to undergo waterboarding. Hannity said he would for charity. Keith Olberman took him up on it and offers to pay $1000 per second.

I don't want anyone to be waterboarded, but if Sean Hannity agrees to the "enhanced interrogation" and not the torture, all for charity, then who do I make the check out to?
Posted by Hank Greer at 6:16 AM

you should go to http://www.waterboardseanhannityforcharity.com/Hannity.htm and you can sign up to have your email sent to Fox and MSNBC so they can tell you where to send the check when Hannity agrees to do it (which I HIGHLY doubt he will). I also love that Olbermann offered to double the amount if Hannity would admit it is torture.

Yes, it is strange that we executed Japanese interrogators after WW2 because they tortured American prisoners by waterboarding. Yet, our media just can't get themselves to say that Bush and co. ordered "torture." They will say "harsh interrogation" or "what some refer to as torture." Unbelievable.

When I went through survival school and resistance training, we were told that this was torture and against the Geneva Convention. We all know that any information gained through torture is probably BS and that the best way to get true info is to befriend your captive.

I think W and his peeps just liked to watch the videos for sexual stimulation. Maybe they would get Jeff Gannon to help reenact scenes.