Check Out My Tan Lines

I'm not going to dwell on it, but let me say that Hawaii was warm and relaxing. It was great to run in balmy weather. I didn't run as much as I should have, but I did manage to include one 7-1/2 miler. I'll finish Bloomsday without a problem, but maybe not as fast as last year. I also picked the guitar again and started rebuilding the calluses on my fingertips. Not that I play the instrument very well, but it's something I enjoyed for many years. With so many interests it's difficult to keep up at everything.

Kathy and I, along with Tim and Mary Beth (Kathy's sister), let the kids fend for themselves while we spent a weekend on Maui. That Sunday morning we skipped the free continental breakfast that came with the one hour time-share seminar at the hotel and went looking for breakfast. The restaurant we ended up at was quite the experience. The food seemed pretty good, but it might be because they're skilled at disguising it. This was the sort of place where in order to make sure everyone experienced the same service and ambiance the manager would've have visited each patron and asked questions like:

Was your table sticky enough?
Were at least half of your napkins clean?
Did everyone have something floating in their water?

We entertained ourselves by placing napkins and paper coasters on the table, setting a plate or cup on them and then trying to remove the napkin/coaster intact. We were 0 for 12. After Tim almost flung his coffee in the air while trying to pick up his mug I got the idea to press our plates and cups firmly onto the table to see how the hired help fared when it came time to clear them. Our evil plot was thwarted as they deftly broke the seal before lifting each item. Well, at least they have experienced staff on hand. On the way out we stopped at the front door to look at the T-shirts for sale in a display case. One of the girls that served us came up and asked, "How many?" Tim reminded her that we just ate and were on the way out. "Oh, I thought you guys looked familiar." Maybe so, but you'll never see us again. You're probably wondering what the name of the restaurant is. Well, life should be full of surprises. If you end up there you'll know as soon as you're seated.

After breakfast we saw a sign for an arts and crafts fair at the Lahaina Community Center. I really enjoy off-the-beaten-path things so we went for it. As luck would have it I got to meet an interesting musician in an out of the way place just like last summer. 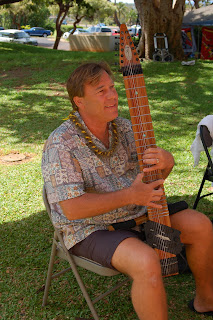 This guy was playing an instrument I've never seen before. It sounded great but I was puzzled. All he was doing was pressing his fingers onto the strings like he was using both hands on the frets of a guitar. But the sound was phenomenal. So I struck up a conversation with Michael Kollwitz and learned he was playing The Stick. The Stick was invented by Emmett Chapman back in the 1970's. Kollwitz was one of Chapman's early students and he's been playing for over 30 years. The right hand plays the treble strings on the left side and the left hand plays the bass strings on the right side. All you have to do is press on the strings--well, in the right places of course. We bought all three CDs he had for sale. You can see a couple examples of him playing on YouTube.

Rather than show you my fish-belly white torso looking like a big tasty morsel bobbing up and down in a shark cage, here are the tan lines I worked so hard on. 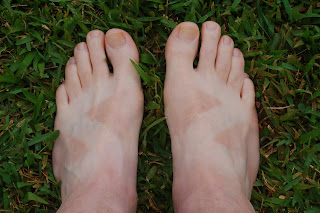 This morning before I rode to work bearing gifts of Kona coffee and chocolate covered Macadamia nuts, Kathy asked if I remembered to bring a towel. Hah! Why would she ask such a silly question?
Posted by Hank Greer at 7:28 PM

Email ThisBlogThis!Share to TwitterShare to FacebookShare to Pinterest
Labels: vacation

Welcome home Hank! Will I see you at the Full Moon Ride on Thursday? I'll buy you a beer.

Sorry, Jacque. I'm loath to turn down a free beer, but I won't be able to make it Thursday. Have fun!

Hope you had a great vacation and welcome back. Hawaii is heaven. Even though your body is home, stay there as long as you can.

Aloha Hank! Glad to hear you enjoyed your time on Maui and I hope you'll come back again. Many mahalos for all your positive feedback about my music on The Chapman Stick. Not a bad photo, either. I'd love to post some of your kind words on my website blog (with your permission, of course). Sending sunshine and aloha spirit your way!