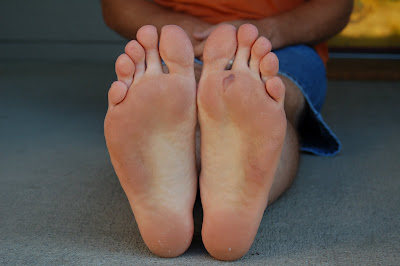 I'm still having issues with my left foot. I can tell I'm not landing on it the same as my right foot and there's evidence of it as well. Ten days ago I got another blister. It's in the same place where I've had one twice before now which is irritating in more than one way. Reading up on the subject I learned I am probably running too fast. Yeah, as if such a thing was possible. In response I've slowed my pace and really try to focus on my footfalls. That seems to have helped this last week.

A funny note about the blister. I tried to lance it and the skin is so thick that the pin wouldn't go through. Rather than risking a sudden breakthrough and possibly have the pin coming out the other side of my foot--I am such a wimp--I left it and allowed the fluid to reabsorb on its own.

One thing I'm noticing is that even though the soles of my feet are thicker, landing on lone small stones still hurts.

That and quite a few people think I'm crazy.
Posted by Hank Greer at 7:56 AM