If Finger Guns Are Outlawed...

...then only outlaws--well, you know the rest.

You've probably heard about the kid at Mead High School who pulled a joke that wasn't received as such.

A Mead High School student found himself in serious hot water Wednesday morning after he sent the school into lockdown status by telling a teacher he had been hired to kill her.

The 16-year-old later told deputies his actions were meant to be a joke. 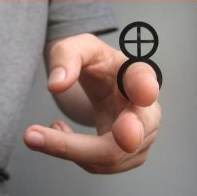 Well, it didn't take long for some of his fellow students to make use of the web and make their thoughts known. One Facebook group is simply called FREE GRAYSON!! and the other is FREE Grayson and LEGALIZE fingerguns!!. We talked about the incident over dinner. Josh thinks that had it been a different teacher, the student would've been taken to the front office and dealt with without calling the police. This is not to blame the teacher involved for overreacting, it's just that people react to things like this in different ways.

When I was in high school, I don't think any of my teachers would've taken it as a serious threat if a student walked into class, pointed their hands at the teacher and said, "An assassin has been hired to kill you. Bang! Bang!" and then walked out.

But these are different times. We have criminalized more behaviors and fear is instilled far too much in our society. I don't make excuses for what this young man did. Suspend him or expel him, but I really can't see charging him with a felony charge of threatening to kill.
Posted by Hank Greer at 7:50 PM

No expulsion! Certainly no suspension! Make this kid sit in the school library with his mom or dad for [x] days while he does his regular assignments AND writes a paper on "The History of Finger Guns" or "The Psychological Ramifications of Being a Teacher Threatened with Assassination" or "How I Learned Not to Shoot Off My Mouth."