I went to the Protect Marriage in Washington site to see what they have to say. I was invited to watch their Marriage is Sacred video so I did. I wanted to include the video here but when I tried I got this: 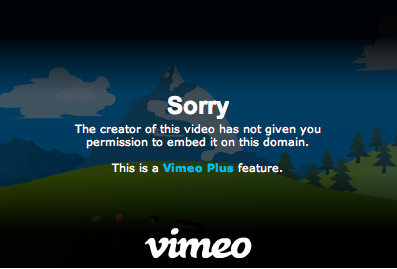 That's odd. You'd think they'd want to spread the word as much as possible. Anyway, the video just stresses that God (emphasized by the narrator each time he says it) specified that marriage is between one man and one woman. I have a point of order. Since they start off with "in the beginning", shouldn't Adam and Eve be naked instead of wearing togas?

Overall, the site contains plenty of "the downfall of our society" predictions and the emotional appeals of protecting marriage and protecting children. There's a heavy reliance on religious appeal.

The sacredness of marriage is hardly under attack by same-sex couples. Such alleged sacredness has been diminished for years by divorce and adultery among opposite sex couples. And the religious have proven they don't have a monopoly on even what they consider to be moral behavior.

I'm for approving Approve Referendum 71. I see no harm in treating non-married couples fairly and giving them the same protections and responsibilities as married couples. Because even if you've taken all the legal precautions, that doesn't mean things always work out the way they should.
Posted by Hank Greer at 7:36 AM