I believe I described my ride in to work as pleasant, invigorating and uneventful. The ride home was...more eventful. I had my first bike lane blocker. 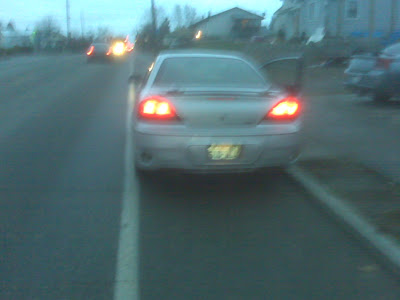 Atrocious Blackberry photo
The woman driving the car got irate and drove up next to me a couple of blocks later. "Hey, why'd you take my picture?"

"You were parked in the bike lane."

"I was just picking someone up."

"So why'd you take my picture?"

"You were parked in the bike lane." (Do you ever get that feeling of deja vu?)

"But I was just picking someone up."

"Okay," I politely repeated and down the road she went. There was no sense getting into an argument and pointing out the driveway that was right there. Don't worry, lady. As you can see from the photo, it's not like everyone on the Interwebs knows who you are.

Next up was a young man of about 12 years old riding a motorcycle. He had no lights, no helmet, and we were about five minutes from total darkness. He and I were riding in the same direction but he was going slower and he was to the far right side of the road. While he did pay attention to oncoming traffic, he didn't look behind and turned left in front of me. I was expecting him to do something like that and as I easily passed on his right I heard his dad yell, "How many times have I told you...."

I don't think the boy is the only one who could use a good talking to.
Posted by Hank Greer at 8:35 AM