I'm Too Sexy For My Shoes

After having much of my drive train replaced, my bike was ready for the commuting season. And today was a good day to start that season off with. Since I have a tendency to occasionally forget things, especially when I'm doing something I haven't done for a while, I double checked to make sure I had all my clothes for work. A spare tube and toolkit were in the panniers and the lights were in working order. While I have a good tolerance for the cold, I needed my balaclava and gloves to handle the wind chill generated by "flying" at speeds in excess of 15 mph. Yeah, sometimes I dare to go that fast. I'm crazy that way.

I have some lightweight black gloves but I couldn't find them which was odd because I usually have them handy and I use them for running. I grabbed a pair of ski gloves which were overkill but better than freezing my fingers. The ride to work was pleasant, invigorating and uneventful. It felt great after being out of the saddle for four months and I broke out in a sweat as I cranked out the miles. As I prepared for my shower at work I discovered I did not have any socks. But on the bright side, I did find my gloves. They were all rolled up, bearing a remarkable resemblance to a pair socks. Sigh. 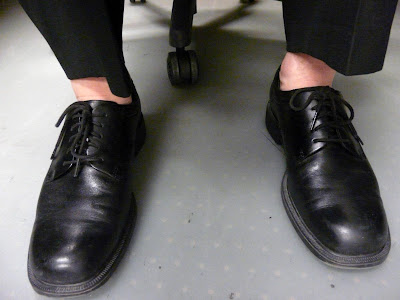 Resigned to looking like this the entire day, I was surprised to get a call from Kathy telling me that she and my sister and her son, daughter-in-law and granddaughter were meeting me for lunch.

I asked, "Can you bring me a pair of socks?" Of course, that meant I had to explain, but the second half of the day was much more comfortable.
Posted by Hank Greer at 6:19 PM