The Importance Of Skype

The farce known as America Speaking Out continues. Cathy McMorris Rodgers is all heifered up about the House's ban on Skype. So much so, she posted on her Facebook page and on Sound Politics.

In the Sound Politics post she links to an idea Congresswoman Michelle Bachmann posted on America Speaking Out in which she wants the ban on Skype lifted and makes it sound like House Speaker Pelosi and her fellow Democrats are arbitrarily preventing its use.

Not only that, but the issue of the Skype ban pales in comparison to the important issues facing us today. In her post on Sound Politics McMorris Rodgers leads off with:

Many Americans today think Washington, D.C. is out of touch with their concerns, and 'behind the times.'

With Americans, allies, and civilians still dying in Iraq and Afghanistan, our congresswoman is right about being out of touch our concerns.

Although her Discussion page reflects I made the last post on the topic, if you go to the Skype topic page you'll see my comment on McMorris Rodgers' Facebook page has been removed.

Weird. Now it's back. 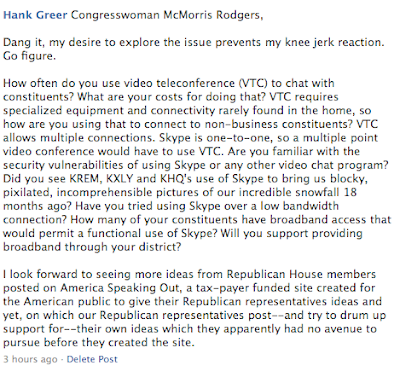 "all heifered up" - that brought a smile to my face.

P.S. I was cheering on the Ironman athletes on Sunday and saw one guy several times on the course who ran the entire marathon portion barefoot. I thought of you.

Cool beans! Although I know it's done, I still can't imagine running a marathon barefoot.

I, too, smiled bigly at "all heifered up!"