Some People Just Have No Sense

From the Pew Forum on Religion and Public Life.

The Dove World Outreach Center, a non-denominational church in Gainesville, plans to host an "International Burn A Quran Day," on the ninth anniversary of the Sept. 11 attacks this year.

The group even has a Facebook page full of bile, hate speech, misinformation and an occasional post from a rational voice. Verses from the Bible and Koran are tossed about as "proof" and Godwin's law has already proven true.

[Pastor Terry ] Jones, who is also the author of a book titled "Islam is of the Devil," said protests are key to the mission of his church. 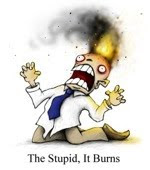 "We feel, as Christians, one of our jobs is to warn," said Jones. The goal of these and other protests are to give Muslims an opportunity to convert, he said.

Which makes just as much sense as a non-Christian religious group burning a pile of bibles to provide an opportunity for Christians to convert. It's sad how one's belief system can be used to justify or rationalize an action that would be egregious and highly offensive were the reverse to happen.

And don't you dare say I'm wrong or there'll be hell to pay.
Posted by Hank Greer at 7:11 AM

I burned Hank's blog, but the fire reduced my laptop to a toxic mess.

But did you burn it because you were trying to convert me to another blog?
- Ventura