I attended Senator Michael Baumgartner's town hall meeting at the MAC this morning. He was pleasant and respectful during the very informal meeting that lasted about 1-1/2 hours. 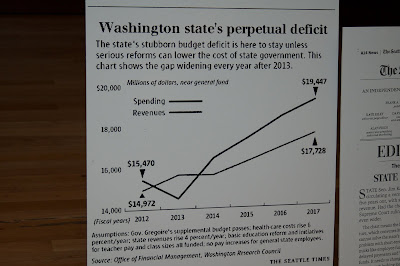 This isn't his chart but he was using to emphasis the same things we keep hearing about the budget. Government wastes too much money; we don't need to raise taxes; collective bargaining is bad for the budget; the budget has structural issues; government worker pensions are too expensive, etc. I asked him at which point the numbers on the chart were based on the assumptions listed below. He said the entire chart was based on assumptions. Setting that strong selling point aside I asked what the historical rate of increase of state revenue was. He said last year's was 7 percent but didn't have any more numbers. 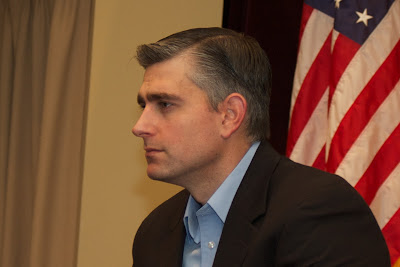 Things got a little sidetracked towards the end. Would you believe Baumgartner supports the Ryan plan? Plus he thinks Social Security contributes to the deficit--it doesn't--and should be privatized but we shouldn't call it privatized. Call it giving people a choice, which would make sense if Social Security was an investment or a savings plan. It's not. What remains a mystery is how giving people a choice makes the program more sustainable. 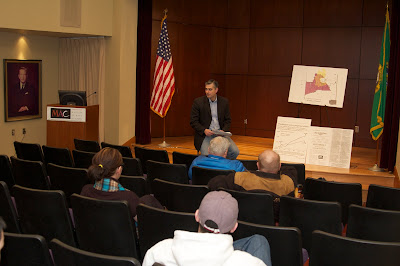 You'd think there'd be more interest in Mike Baumgartner's town hall meeting since he and Chris Marr spent nearly a million dollars fighting for the seat. All told, there were a dozen people present to listen to a pleasant and respectful person put a sane face on Tea Party politics.

After installing Google Earth and checking out the new legislative district maps, I find I am soon to be transferred to Legislative District 7. Sigh.
Posted by Hank Greer at 12:34 PM

" Plus he thinks Social Security contributes to the deficit--it doesn't..."

But, that's not the story. The government effectively borrowed against the "surplus," and of course Obama cut the revenue by halving the payroll tax.

Social Security is part of all expenditures, and the payroll tax one revenue source (a very regressive one) among many. The payroll tax has been used to pay for ss and non-ss expenditures. There is no "lock box."

If ss were in good fiscal shape, why do (boomer) Democrats and Republicans keep ordering young people to work longer for less benefit than boomers will receive?