Not The Family Feud 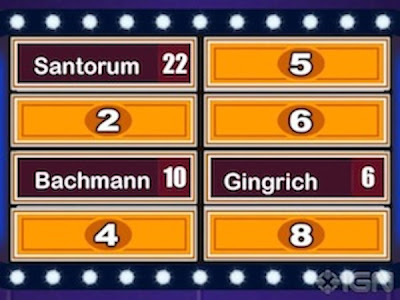 You have until Jan 25 to participate in a survey by one Steve Beren, a former antiwar activist and socialist who is now a patriot and a Christian, concerning the GOP picks for this election year.

1. AGREE or DISAGREE? "President Obama is not just an average statist progressive liberal Democrat. He is one of the worst presidents ever. We can't have him making the Supreme Court nominations through January 2017. We can't have him holding a veto pen when Congress repeals Obamacare in early 2013. We should support our favored candidate in the primary/caucus process, but once a GOP candidate wins the nomination, we should unite to support that candidate as superior to Obama, even if the GOP nominee is not our first choice, and even if we disagree with the nominee on some important issues."

2. AGREE or DISAGREE? "The effort to repeal and defund Obamacare will be a central 2012 campaign issue. There should be no federal or state mandates forcing people to buy healthcare insurance. The GOP needs a presidential candidate in 2012 who can persuasively, articulately, and effectively lead the effort to repeal Obamacare. We need a candidate whose candidacy would convincingly embody the citizens' opposition to government-run healthcare."

3. AGREE or DISAGREE? "President Obama lacks a victory strategy in the war imposed upon us by the pro-terrorist, anti-liberty, caliphate-seeking Islamic fascist political movement. The GOP needs a candidate who supports the traditional pro-liberty, morality-based conservative foreign policy of Reagan to reverse the Obama foreign policy of apology, weakness, retreat, appeasement, decline, and defeat."

You know what's over the top?

Gitmo is over the top.

It's interesting that Obama has taken unprecedented unilateral executive power, but he won't simply order the military to ship the remaining captives off to the Hague or a Federal pen. He'll illegally declare wars, but won't use his C-in-C power to end the illegal era of Cheney-style war crimes.