Today's Review contains an article about the US trying to contain the damage from a video showing US Marines urinating on corpses.

As the video spread across the Internet in postings and re-postings, U.S. officials joined with Afghans in calling it shocking, deplorable, inhumane and a breach of military standards of conduct. It shows men in Marine combat gear standing in a semicircle urinating on the bodies of three men in standard Afghan clothing, one whose chest was covered in blood.

It’s not certain whether the dead were Taliban fighters, civilians or someone else.

“The danger is that this kind of video can be misused in many ways to undermine what we are trying to do in Afghanistan and the possibility of reconciliation,” [Defense Secretary Leon] Panetta said at Fort Bliss, Texas, adding it’s important for the U.S. to move quickly to “send a clear signal to the world that the U.S. will not tolerate this kind of behavior and that is not what the U.S. is all about.” 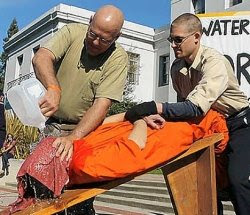 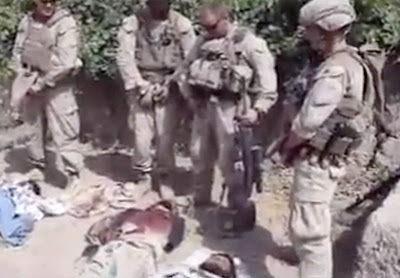 Urinating on corpses - unacceptable.
It's all about sending "a clear signal to the world that the U.S. will not tolerate this kind of behavior and that is not what the U.S. is all about."
Posted by Hank Greer at 6:13 AM

But, it's still OK for President Obama to joke about killing children with drones at the Correspondents' Dinner, right?

It's OK to kill people, including children, and to joke about it, as long as you don't literally piss on them, am I right?