Who You Talkin' To?

Cathy McMorris Rodgers is upset and had this to say on her Facebook page.

Like many of you, I oppose President Obama's unprecedented recess appointment of Richard Cordray as head of the Consumer Financial Protection Bureau - I believe it is all too indicative of this President's unwillingness to work with Congress. At a time when the American people are demanding bipartisan solutions, the President couldn't have picked a worse way to start the New Year. It's time for the President and Congress to work together to address America's problems because that's the only way we're going to solve them.

Our congresswoman is severely bothered that President Obama is unwilling to work with a Congress which has been rendered incapable of legislating by a Republican party that is solely focused on making Obama a one term president and ensuring the One Percent get to keep their money all the while pretending to look out for you and me.

Not only did Obama do a recess appointment of Richard Cordray to the Consumer Financial Protection Bureau, which is not able to completely function without an appointed director. He also appointed three people to the National Labor Relations Board which was unable to function as of January 3 when the term of one of it's members--a recess appointment from last year--ended and left it with only two people. (The Supreme Court ruled that a quorum of three is required.) With a full board it is ready to continue its work. The CFPB can now do its job of protecting consumers in the "shadow" banking arena and announced it will begin examining payday lenders and others outside the banking industry.

Cathy McMorris Rodgers is not pleased with this. Not pleased at all. Apparently she would prefer that Senator Mitch McConnell continue his filibuster of these appointments, as he has been doing for quite some time now. Recess appointments are not common, but only because the Senate has rarely been involved in a determined effort to prevent a president from making any appointments. Here is the result of such an effort since Mitch McConnell took over as Senate Minority Leader with the 110th Congress. 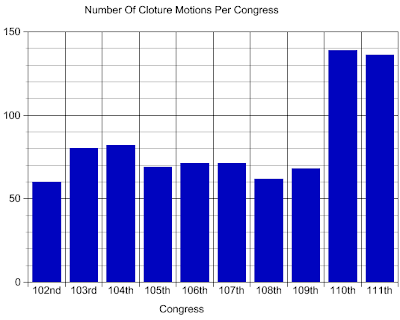 A cloture is the only procedure by which the Senate can vote to place a time limit on consideration of a bill or other matter, and thereby overcome a filibuster. In the meantime, around fifty people nominated for federal judge positions wait...and wait...and wait as McConnell and his fellow Republican party senators filibuster without speaking.

McMorris Rodgers is right. It is time for the President and Congress to work together to address America's problems. But I get the impression she's not directing her remarks to her own party.
Posted by Hank Greer at 9:58 PM

Hank, the legal question is whether or not the Congress was actually in recess. The Senate was in pro forma session, so there was no recess. Additionally, Obama has in the past stated that he would not make a recess appointment until the Senate completed a full three days of recess.

I suppose we could agree that the pro forma was merely to prevent recess appointments, much like the Senate has done in the past - but it still does not answer the legal question.

One last point - the nominations for the NSRB members were made just two days before the Senate was scheduled to adjourn last month, neither has undergone a single confirmation hearing or a single day of debate.

America is so much better off without all those silly checks and balances. Finally we have a President who can declare war without Congress, and spy on, imprison, and kill citizens without the Courts! Why shouldn't he take over all Congressional functions?

As Hank says, how dare American voters limit Obama to one term. He deserves two, no three, no a hundred terms!

I loved how Bill Clinton killed Glass-Steagall, but Obama's decusion to "protect consumers" rather than prosecute Wall Street is even more cunning.

Dodd and Frank, the Abbot and Costello of Congress, definitely provided a comic diversion while the perps got away.

Yep, Democrats are laughing all the way to the bank, just like Republicans.

I think they call that bank Citizens United.

There was plenty of bipartisan support for the anti-labor trade deals, why didn't Obama couple their passage to the appointments to the Labor board?

There was plenty of bipartisan support for the unConstitutional power for the president and military to unlawfully imprison American citizens. But now that a Democrat President has signed the bill, Democrat "civil libertarians" have fallen silent on the issue.

Good point on the legal question involved. There's some interesting history involved. Check out these two reports from the Congressional research Service. (Sorry for the ugly link. Search for rs21308 and theseare the top two results on Google.)

Granted two nominations were made last month, but Senator Lindsay is on the record as saying, “I will continue to block all nominations to the NLRB until we get satisfactory answers regarding their role in this entire saga [The NLRB's complaint against Boeing in South Carolina]. Given its recent actions, the NLRB as inoperable could be considered progress.”

So it's not like they were going anywhere anyway. Besides, the constitution allows it.

I don't know. As to the text in the recently NDAA that appears to allow for the indefinite incarceration of US citizens, I too am troubled that Obama signed it even though it troubled him.

Hank, here is another perspective on Obama's recent appointments:

Thanks, Al, but it looks like I'll have to wait for the free copy. I don't have a subscription.

I disagree that Obama was "troubled" by indefinite detention, since his signature is consistent with all of his policies regarding executive power.

The attempt by Democrats to minimize civil liberties and war powers issues is blatantly partisan. Democrats voted against Bush for doing less than Obama has done. But now the rule of law doesn't matter anymore, to either major party.

Oh lighten up. You've got to admit Hank has coined a great new campaign slogan:

I'm just glad Hank has dropped the nonsense about "legality" and "rule of law" blah blah blah. I was worried he actually believed in all that 18th century libertarian rubbish.

Let's just cut to the chase and crown a king.