Yesterday, Steph and I attended a workshop put on by the League of Woman Voters of Washington at the South Hill Library. Entitled Civility in Our Democracy, the workshop focused on the need for civility, recognizing your triggers and your physical reactions to them, conflict styles and strategies, asking open questions, and neutral issue framing. 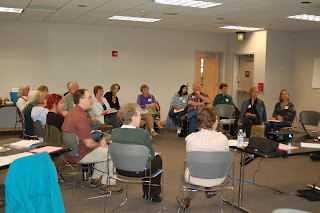 Steph wasn't all that keen on going because she's not interested in politics. But as you can see, the tools and skills covered by the workshop apply anywhere--work, school, home, etc. So it turned out to be very beneficial for us both.
Posted by Hank Greer at 9:27 AM

I respectfully disagree with the League that we have a representative democracy any longer, or the implication that non-elites are the primary source of incivility.

These are profoundly uncivil actions that have destroyed US civil society. We need to distinguish between civility and docility, between being an engaged American citizen or just another Good German casting a meaningless vote in a plebiscite.

No one can vote for a Republican or Democrat, knowing their policies, and call him or herself a civil person.