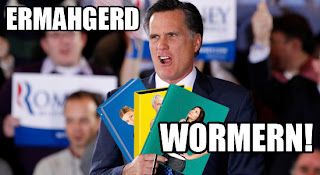 Thank goodness the Internet exists
to highlight the entertainment value of presidential debates.
Posted by Hank Greer at 9:34 PM

Obama and Romney were so scared of what Jill Stein, Green Party candidate (and a woman, btw) might have to say that they had her handcuffed to a chair for eight hours.

That's what the "bipartisan" Committee on Presidential Debates calls civility.

So, that's how Obama plans to win, by literally binding any woman who dares run against him or the corporations which own him.

Between Republican voter suppression and Democratic candidate suppression, it's increasingly obvious that the civility and frivolity of this "election" is just a mask for teh same old Fascism.

Yes, thank god for the internet. I would have completely missed Obama and Romney's weird police action against Stein and her (also female) running mate, since the mainstream papers aren't even covering it.

8 hours handcuffed to chairs in a warehouse guarded by 15 cops? Then dumping them after the debate without arranging a pickup? Threatening people waiting to pick them up with arrest? Isn't that just a might excessive?

It's not an exaggeration to call that fascism. Could you imagine the outrage if elites like Obama or Romney faced that kind of treatment. Oh, we can't prosecute Wall Street criminals or torturers, but we can lock up third party Presidential candidates.

The only coverage (mostly) is on "fringe" websites like Democracy Now:

Where's the White House statement on Stein's illegal restraint? Where is Romney's reaction?

I think the candidates are showing how they really treat women who get too uppity.

Stein's description is obviously of a coordinated Homeland Security operation.

Obama's kettling, detention and stress-position restraint of Stein is the same basket of tactics he used to succesfully suppress the Occupy movement.

Obama's approach is based on tactics initiated by the Bush White House against Muslims in New York City after 911, and is different only in degree from actions against Muslims at Guantamano.

The difference now is that Democrats are voicing no objections to what Obama and Homeland Security are doing, while they did protest against Bush.

Using such tactics into the electoral process is something not seen since Democrat Woodrow Wilson railroaded Eugene Debs into prison for "sedition."

At best Stein should have gotten a ticket, and in the end was charged with nothing. Obama's point was to silence her.

A journalist at Esquire is now breaking the silence, and suggesting the Secret Service purposely kept reporters away from the arrest of Stein.

If the Secret Service was involved in detaining Stein and preventing her from campaigning for President, that is clear federal involvement and a violation of Stein's rights, her supporters rights, and the law.

Where is the New York Times and other outlets?

Jill Abramson's New York Times is Obama-centric in its election coverage, and her exclusion of Green Party coverage goes back for weeks now, well before her censorship of the Stein arrest and detention.

Abramson brings a higher level of journalism than under Keller of course, but she has a decidedly narrow world view. Pieces on Obama have started to border on fluff, and the paper is extraordinarily deferential to Obama's official leakers. (All the more ironic given Obama's obscene brag about imprisoning real whistleblowers for leaking.) I don't a remember a time that the Times was as deferential to the incumbent in an election actually.

If election night comes down to a one point spread in a swing state with Green voters, though, the Times would be unprepared to provide any background, judging by its current coverage. Abramson won't admit the existence of the Green Party, let alone that it may play a role in the election outcome. Not that dissimilar to Obama binding Stein to a chair and imprisoning her out-of-sight in a warehouse. Obama and Abramson are both kinda out-of-sight out-of-mind magical thinkers.

Of course, the Times approach to the Republicans, particularly Ryan, reveals less a critical stance than a contempt born in part from unexamined cultural difference. Obama is much more Abramson's kind of cool elite. The Ryan who appears in the Times is an oddly distorted cartoon, and by dismissing Ryan's substance with a laugh, the Times fails to engage Ryan's policy suggestions with substantive rebuttal. Much like Obama.

The Washington Post actually bests the Times in broader spectrum coverage, and they did refer to l'affair Stein in a blog post at least. Also, you can read George Will making a progressive case against Dodd-Frank and for breaking up the big banks. Yup. Left of Obama on that one. (Let's face it, Democrats and Times: Obama's elite-pandering bank reform is ridiculous, and neither left nor right, or up or down. It is far more stupid than your portrayal of Ryan.) Romney makes the same rumbles against D-F, but the Times is tone-deaf to him because he strays from the Times narrative for him. Same on China, where Romney's rhetoric is far more substantive than Pollyanna Obama. Not that anyone should trust Romney either.

On the other hand, the British Guardian and, oddly, Putin's RT are probably better on the US election than anything in the States. Go figure.

I know this isn't the politically correct wisdom, but I though Obama sounded like a condescending idiot in this debate.

He sounded like he was channeling Bush. Patriotism uber alles. Don't question me, little people.

Yeah, Michael Moore, what happened? Moore, Springsteen, the Clintons, Obama--all boomers who made a lot of money pretending to represent the working class and who have now sold out.

Some worker should do a "Michael and Me" movie. Show Moore's penthouse, Springsteen's mansion, the Clintons lifestyle, set to "My Father's House."

Yep, the Boss has turned out to be just another self-satisfied, preachy, middle-aged...boss.

"I'm sorry son, but no one by my name, lives here anymore."

The celebrity situation for the working class is, as our President might say, "not optimal."

And don't even mention Kid Rock.

Bruce Springsteen is the Lance Armstrong of rock musicians.

Springsteen's audience was more frat boys than auto workers. Blue collar white guys back in the 80s listened more to country or Bob Seeger or Zepplin.

Springsteen: strap your legs across my engines, young suckers.

The Democrats keep using pictures of a much younger Springsteen from the 70s to advertise his endorsement. Kind of like expecting Thin Elvis and getting Fat Elvis. Reagan and Obama now have both tried to ride Springsteen's young Levi 501 ass™ to victory.