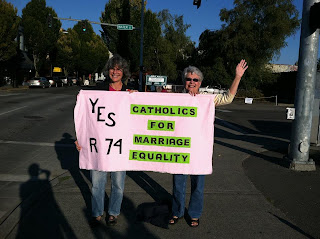 Judith, on the right, and a friend placing the eternal salvation  of their souls in serious jeopardy. Gutsy ladies.
Posted by Hank Greer at 8:11 PM

At this point, the Pope is just relieved that the latest apocrypha proclaims that Jesus married Mary the Magdalene and not James the Beloved.

Here's a clue, Benny: the butler did it with a salami in St. Peter's.

I think that's John, not James.

Now that we've got Jesus married, it is interesting to speculate if the marriage was just a cover.

Maybe Jesus was married, it was the convention at the time and it didn't seem to be a matter of debate until the time that the recent scrap of gospel was written.

Maybe Jesus wasn't, maybe the "son of Mary" had trouble finding a wife, as a bastard. Even the canonical gospels point to a stranged relationship between mother and son.

It could be that Jesus was married, but there was something unusual, or common-law about the arrangement. Could be his wife was not of highest social position. Dot dot dot.

There is zero in Jesus's canonical sayings that might give an indication of his sexuality. The "beloved John" is an editorial comment. Jesus didn't write it.

But, who might want to put in words that John was particularly loved? How about John himself? Might the real question be whether John was gay?

Might John have loved Jesus and sublimated that love into worship, particularly after death? He wouldn't be the first to deify an (unrequited?) lover who died too young.

So much of christology points back to John, present at so many of the final events. At the Last Supper, at the cross ("Mary, your son"), first at the tomb. Much of the resurrection story seems to come from John, Jesus' mother, and Mary Magdalene in the days/years after the death. You can kinda imagine the three of them hanging out and commiserating. Keeping Jesus' room exactly as it was. Trading stories.

The church's structure seems to follow the pattern, almost gay-affirming. The extremely male-dominated church is the "bride" of Christ, the all-male priests serving the bride, sometimes personifying the bride.

The church's refusal of gay marriage almost seems over-compensation proving the point, particularly since such a large percentage of the priesthood is gay.

The Pope should let his freak flag fly. In John's name, if not Jesus' own.

Maybe the "signs gospel" should be called J, like Q.

If J was the gay gospel, and a primary source for the Passion narrative, and Gospel John particularly built on it, then what was the relationship between "the beloved" and Judas? Gospel John really had it in for Judas. What did Judas, as a villian and a traitor, represent to John? Betrayal with a kiss, hmmm.

If gays were identified with a faction or factions of Christianity and tradition from the start, the oppression of gays may represent more than just homophobia, but an ancient power struggle within the Church. The Pope may fear legitamizing open recognition of gay marriage will delegitamize his own claim to power, if that power rests in part on cooption of a suppressed gay narrative.